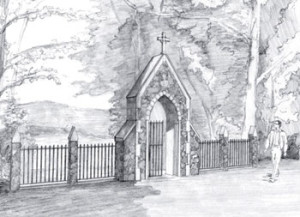 Artist’s rendering of the Founders Graveyard

Today Christendom College announced new plans for the gravesite of the college’s founder, Dr. Warren H. Carroll, who died two years ago on this date. The plans involve the construction of a stone archway and custom iron fence at the site where other members of the founding faculty will also be buried. The Founders Graveyard, as it will be called, will pay tribute to the sacrifices made by these pioneers in the rejuvenation of faithful Catholic higher education.

The Graveyard will be located behind the Regina Coeli Hall where Carroll was buried on July 24, 2011. In the fall of 2012, a beautiful headstone was created for the college’s late founder, and in the fall of 2103, the College hopes to complete the beautification of the site.

The college is calling on the alumni, faculty, staff, students, benefactors, and friends of Christendom to come together and raise the needed funds to begin work on this project by the end of August. The hope is to dedicate and bless new site at Homecoming Weekend on October 12.

Below is an estimated cost of project:

To make a tax-deductible donation online, visit christendom.edu/graveyard, or send a check made payable to Christendom College to: