Jewish convert to Catholicism Roy Schoeman recounted his conversion story at Christendom College on September 19 as part of the College’s Major Speakers Program.

Schoeman was born in a suburb of New York City of “Conservative” Jewish parents who had fled Nazi Germany. His Jewish education and formation was received under some of the most prominent Rabbis in contemporary American Jewry, including Rabbi Arthur Hertzberg, probably the foremost Conservative Rabbi in the U.S. and his hometown Rabbi growing up; Rabbi Arthur Green, later the head of the Reconstructionist Rabbinical College who was his religion teacher and mentor during high school and early college; and Rabbi Shlomo Carlebach, a prominent Hasidic Rabbi with whom he lived in Israel for several months. 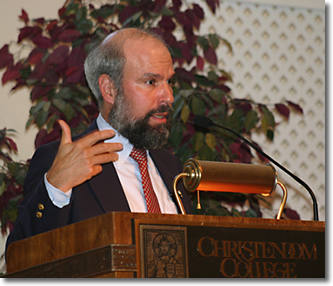 “Growing up I was unusually devout and passionate about God and Judaism,” began Schoeman, “although the suburban conservative context I was in did not really support a life of piety, faith and prayer. Although I tried to maintain my religious orientation, there was a fatal flaw in it which soon led me astray. I had no understanding of the relationship between religion and morality, particularly sexual morality. So my religiosity soon became mixed up in the drug and ‘free love’ culture which was rampant, and soon degenerated into the immoral, vague hippie ‘spirituality’ of the time. My thirst for God became, for a long while, satiated by the false consolations and delusional spirituality of that environment.”

For much of his young adult life, Schoeman lived with tremendous inner tension. He had a yearning for transcendent meaning, and a refusal to let go of that yearning for more than short periods, but had no knowledge of what that yearning was truly for, and hence no sense of which direction to go.

In 1987, his life changed forever. While on vacation in Cape Cod, God intervened, dramatically and distinctly, into his life to pull him back and put him onto the right path.

“As I was walking, lost in my thoughts, I found myself in the immediate presence of God,” he recalled. “It is as though I ‘fell into Heaven.’ Everything changed from one moment to the next, but in such a smooth and subtle way that I was not aware of any discontinuity. I felt myself in the immediate presence of God. I was aware of His infinite exaltedness, and of His infinite and personal love for me. I saw my life as though I was looking back on it after death, in His presence, and could see everything which I would be happy about and everything which I would wish I had done differently. I saw that every action I had ever done mattered, for good or for evil. I saw that everything which had ever happened in my life had been perfectly designed for my own good from the infinitely wise and loving hand of God, not only including but especially those things which at the time I thought had been the greatest catastrophes. I saw that my two greatest regrets when I died would be every moment which I had wasted not doing anything of value in the eyes of God, and all of the time and energy which I had wasted worrying about not being loved when every moment of my existence I was bathed in an infinite sea of love, although unaware of it. I saw that the meaning and purpose of my life was to worship and serve my Lord and Master, in whose presence I found myself. I wanted to know His name, so that I could worship Him properly, so that I could follow ‘His’ religion. I remember silently praying ‘Tell me your name. I don’t mind if You’re Apollo, and I have to become a Roman pagan. I don’t mind if You’re Krishna, and I have to become a Hindu. I don’t mind if You’re Buddha, and I have to become a Buddhist. As long as You’re not Christ, and I have to become a Christian!'”

But Schoeman would have to wait a while before getting his answer. Every night before going to sleep, he would say a short prayer to know the name of his Lord and Master and God whom he had met in Cape Cod.

“A year to the day after the initial experience, I went to sleep after saying that prayer, and felt as though I was woken by a gentle hand on my shoulder, and escorted to a room where I was left alone with the most beautiful young woman I could imagine,” he said. “I knew without being told that she was the Blessed Virgin Mary. I felt entirely awake (and my memory is as though I had been awake), although I was dreaming. I remember my first reaction, standing there awed by her presence and grandeur, was wishing I knew at least the Hail Mary so that I could honor her! She offered to answer any questions I had. I remember thinking about what to ask, asking the questions, and her answers. After speaking to me a while longer, the audience was ended. When I woke the next morning I was hopelessly in love with the Blessed Virgin Mary, and I knew that the God I had met on the beach was Christ, and that all I wanted was to be as much of, and as good a Christian as possible. I still did not know anything about Christianity, nor the difference between the Catholic Church and any of the hundreds of Protestant denominations. It took me another two years or so to find my way to the Catholic Church, guided by my love and reverence for the Blessed Virgin Mary.”

He was baptized and confirmed into the Catholic Church in 1992. After first discerning a vocation to the religious life, Schoeman realized that he had another vocation, although still a vocation to holiness and to service to Christ.

“Although I have no religious or priestly vocation, there is nothing in my life which is not for Him and around Him. In a number of small ways I am active in the Church, with daily Mass and prayer being at the center of my life — writing, teaching or speaking whenever asked, producing and hosting a Catholic TV talk show. I will never know, this side of Heaven, whose prayers and sacrifices purchased the graces for my entirely unsought after and undeserved conversion, but I can only thank them profoundly, and exhort others, too, to pray for the conversion of the Jews; that the people to whom Jesus first made Himself known may come into the truth and into the fullness of their relationship to Him in the Catholic Church. How tragic that we to whom God first revealed Himself as Man should be among the last to recognize Him!”

Following his conversion story, Schoeman spoke about the role of the Jews in salvation history, giving his audience a deeper understanding of Judaism, both as a religion in itself and as a central component of Christian salvation. He briefly traced the role of Judaism and the Jewish people in God’s plan for the salvation of all mankind from Abraham through the Second Coming, as revealed by the Catholic faith and through examining history, showing the infinite nobility and importance which Judaism has as God’s own religion, and the unique and central role it has in the destiny of all of creation.

The College looks forward to welcoming Dr. Mary Shivanandan on November 14. Shivanandan is a professor of theology at the John Paul II Institute for Studies on Marriage and Family in Washington, DC, where she has taught since 1989. Her area of expertise is theological anthropology with an emphasis on the theology of the body.