Basing his report on the Intercollegiate Studies Institute’s college guide, Choosing the Right College: The Whole Truth about America’s Top Schools, Newsmax writer Peter M. Davidson reviewed the college guide to “find the best schools for conservatives, campuses where a core curriculum requires a rigorous exposure to the great thinkers who have shaped our political, religious and cultural heritage, and where the atmosphere for learning is nurtured by genuine intellectual freedom, tolerance and tradition.” 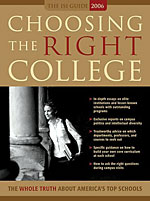 After placing The University of Chicago and Hillsdale College in the top two positions, Davidson then explains why he chose Christendom to be in the number three slot.

Christendom is a “solidly Catholic, profoundly thoughtful liberal arts college,” he writes, and its “core curriculum goes beyond what many liberal arts colleges require, with six semesters of philosophy in order ‘to assist the student in using reason to understand the nature of reality and to illumine further the truth of revelation.'”

He concludes: “Christendom College is highly recommended for students who are serious about their Catholic faith. Daily mass is an integral, but not mandatory, part of college life. Most faculty members and students would be considered conservative, but there is no lockstep conformity at Christendom. The college, however, does enforce a dress code.”