by Joseph Pronechen
from the National Catholic Register
(Published in issue October 1-7, 2006)

Fathers of Mercy Father Anthony Stephens was only ordained last summer, but already parishioners at St. Luke Catholic Church in Nicholasville, KY are seeing Christ in him. Maybe that’s because he sees Christ in them. 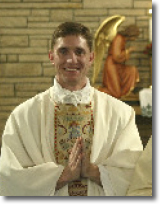 Choir director Terry Leitch can’t help but notice the little 3-year-old boy from a family of six children who wants to be a priest and likes to “play Mass” with his brother, saying, “I want to be Father Tony.”

Andy Johns, youth director for this 330-family parish, not far from Lexington, has a mental portfolio of many similar moments, like the time he ran out to his car to retrieve some papers during the youth group’s meeting. A mother parked outside with her young children asked him if Father Stephens was with the youth group that day. She and the children were out running errands and, she told Johns, “My son wanted to stop and say hi to Father Tony.”

Memorable examples of the way Father Stephens has encouraged Catholics of all ages roll out in rapid succession – familiar images of him gathering teens for the March for Life, playing football with the kids as his black cassock flaps in the wind, spending hours in prayer before the Blessed Sacrament.

In addition to his own daily devotions to Jesus in this parish that has perpetual adoration, Leitch says, “You’ll find him even at 3 a.m., covering for people who can’t make it. He loves to be in the presence of the Lord.”

That quality is apparent to everyone. Johns can’t help but see Father Stephens’ great reverence celebrating Mass, down to the way he purifies the chalice after Communion.
There was something in that simple action that resonated with me about his love for the Eucharist,” says Johns.

There are all among the ways Father Stephens brings the New Evangelization to people. For his order, the Fathers of Mercy, he calls it re-evangelization through the sacraments, Eucharistic adoration and reverent offering of Mass.

“It’s really a nuts-and-bolts approach we take,” says Father Stephens. “We really try to encourage people if they’ve been away for awhile or less fervent in the practice of their faith. We try to help them take their faith more seriously through a love for Christ in the Eucharist and through the sacrament of confession. There is a lot of healing to be found in this sacrament in particular.”

The youth group gets the picture when Father Stephens, who helps by co-directing it, leads activities like the Holy Half-Hours and the Dead Theologians’ Society discussions. One session looked at the Cure of Ars with a special focus on the sacrament of reconciliation. The teens learned the saint spent up to 18 hours a day hearing confessions.

“It was like scales fell from their eyes,” says Father Stephens. “The questions came and you could tell the Holy Spirit was working.”

This year, he’s looking to have some guided meditations with the Holy Half-Hours before the Blessed Sacrament with the teens so they gain a love for the Eucharist and for Catholic tradition, he explains.

“Holy God, We Praise Thy Name’ is a song all Catholics should know by heart, all three verses,” he says. “They should know what a monstrance is. And the smell of incense. It’s not to trigger a coughing fit but trigger our hearts to prayer.”

This great love for the Church and traditional Catholic devotions was already clear to Father Anthony Manuppella, pastor of St. Peter Catholic Church in Merchantville, NJ, where Father Stephens worked during his deaconate summer. It wasn’t the only quality that impressed the pastor.

“The first was his humility; he was willing to listen with docility to me as a pastor giving him little hints and helps,” recalls Father Manuppella. Pointing to his preaching, for one example, Father Manuppella adds: “He was so good and wanted to better himself. He wanted me to critique his homilies. It’s not an easy thing to have the pastor critique your homilies.”

“He had this equilibrium,” says the pastor. He still sees it as Father Stephens remains in contact by phone and e-mail to discuss pastoral and spiritual matters and seek his mentor pastor’s insights.

Citing Father Stephens’ words in the confessional, Leitch notes a depth of wisdom in the young priest uncommon to his age group. “One of the things amazing to me,” she says, “is how on-target his advice has been.”

For his part, Father Stephens projects an obvious joy in the way he talks about his mission to help people appreciate the faith more. He certainly appreciated the example of the Fathers of Mercy he encountered at Christendom College while he was a student there, first with thoughts of being a veterinarian.

The oldest of six children, he grew up on his family’s Kansas cattle farm. He’s grateful to his father and mother for encouraging him to discern a possible priestly vocation.
Once he and the Church felt sure his call was authentic, Father Stephens says, the Fathers of Mercy order seemed ideal because their primary charism of traveling and preaching parish missions clicked with him.

He will remembers his first visit to the order in Kentucky. “It was like a hand in glove; it just fit,” he says. Then it was off for studies at Pontifical College Josephinum in Ohio.

When he is eventually called to travel the country preaching parish missions as a Father of Mercy, others will surely learn the same lessons of love for the sacraments and for the Church that parishioners at St. Luke’s have.

“Any pastor,” says Father Manuppela, “would love to have him.”