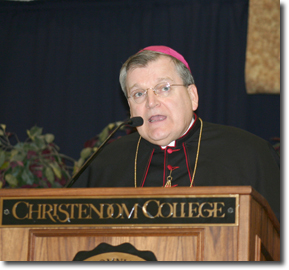 On June 27, the pope made the announcement that His Excellency would be replacing Cardinal Agostino Vallini.

“Archbishop Burke is a very great and holy man,” College President Dr. Timothy O’Donnell said. “The entire College community is delighted to hear of his appointment. Though we will miss him in the U.S., I hope our Rome campus will be able to benefit from his wisdom and pastoral love of Christ and His Church.”

Last September, Archbishop Burke visited Christendom College for an academic convocation celebrating the college’s 30th anniversary where he was awarded a Doctorate in Humane Letters.

Following the conferral of the degree, His Excellency told the college community that he could not think of any university from which he would be more pleased to receive an honorary doctorate than from Christendom College.

“Although this is my first visit to the campus I have followed the life of Christendom College for many years.  I’m very well acquainted with the writings of Dr. Warren Carroll, and I have also long admired the work of Dr. O’Donnell, and am a faithful reader of the newsletter of the College. I have known a number of the alumni, and of course, I always think that the ultimate test of the excellence of a Catholic college is the quality of faith in Christ and in His Church of the alumni, and Christendom certainly stands out in that regard,” he said.

As prefect of the Supreme Court of the Apostolic Signature, Archbishop Burke will hear appeals of decisions issued by lower church courts.

A canon lawyer, the archbishop worked for the court during 1989-94 and was named a member of the body in July 2006. He also served on the Roman Rota, the church’s central appeals court, before being named bishop of La Crosse, Wis., in 1994.