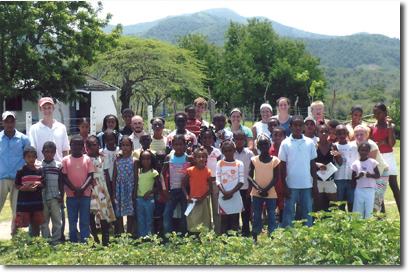 The Diocese of Arlington’s mission in Banica, in the Dominican Republic, was home to 19 Christendom students doing missionary work there for two months this summer.

“Contrary to our thoughts – that we were going to help them – they really taught us a thing or two,” recent graduate Erin McCafferty said. “All the Dominicans, especially our host families, opened up their homes as much as they opened up their hearts to us all. Although they have less than we do in America, they all have a certain mentality that we missionaries came to deeply admire and that all Americans can learn from.”

She found that her Christendom education was utilized in so many aspects of her missionary work. Christendom had fostered within her an ability to speak candidly about theology and the Catholic spiritual life, she said.

Due in part to her experience in Banica, McCafferty decided that she wanted to continue working for an apostolic endeavor and accepted a position as the Assistant Director of Religious Education at St. Mary’s Catholic Church in Alexandria, VA.

Working with the students in Banica was Christendom’s new chaplain, Fr. Daniel Gee.

“When I was assigned to Banica I thought I was blessed—I was overjoyed. I had visited it as a seminarian and it was always something that I wanted to do,” he said.

Fr. Gee related that for the first two weeks, the Christendom missionaries built a huge barbed wire fence and a pavilion for the parish center, which would provide shelter from the sun or rain for meetings and meals. In the remaining weeks, the missionaries broke up into teams and led five-day summer camps to the various campos (small villages). The missionaries taught classes in art, music, sports, and catechism.

“I’ve always been highly impressed with Christendom students,” Fr. Gee said. “It was the only place from which we accepted summer missionaries because we knew we could count on them.”

Since the start of the Mission Trips Program in 2000, Christendom has completed 18 different mission trips, 12 of which have been to Banica.

Brown sees the trips as opportunities for students to see firsthand what real poverty is like.

“This is something that most young Americans read about but do not understand because they never directly encounter it. The experience of real poverty has had a life-changing impact on many of our students—they’re more grateful for what they have, they’re more detached from materialism, and they’re more sensitive to their responsibility, as Christians, to serve the poor,” he said.

Students experience a spiritual rejuvenation and return with a deeper desire to serve the Church and others. Upon graduation some students have devoted up to two years in mission work, four returning to Banica.