College Invites All to Join in Prayer for Pope Benedict XVI

On August 1, Christendom College extended an open invitation to join in contributing to a spiritual bouquet—a list of prayers offered or to be offered—to Pope Benedict XVI as an act of thanksgiving and solidarity during the Year of the Priest. College President Dr. Timothy O’Donnell plans to personally deliver a card enumerating the prayers to Benedict in the spring. 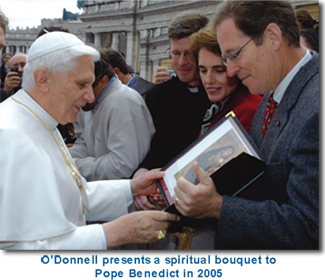 “Without the priesthood we would all spiritually starve,” O’Donnell said. “They make Jesus available to us in the Eucharist and through the sacraments. Because it is the Year of the Priest and Pope Benedict is our great high priest—the sovereign pontiff—it would be fitting to unite ourselves in a special way to the Holy Father and to his intentions.”

O’Donnell explained that members of the Christendom community have a special devotion and charism for the person of the Holy Father. “Especially since in recent months he has been attacked and vilified by the press in a number of ways, it is crucial that we as Catholics express our loyalty and support for him as a priest and as the supreme teacher.”

O’Donnell will be traveling to Rome in the spring to visit with the students participating in Christendom’s Junior Semester in Rome Program and to meet with a number of the college’s friends and supporters in the Curia. At that time he hopes to present the spiritual bouquet to Pope Benedict.

Contributions to the spiritual bouquet can be made by calling 800.877.5456 ext. 1239 or emailing rpodlinsek@christendom.edu.