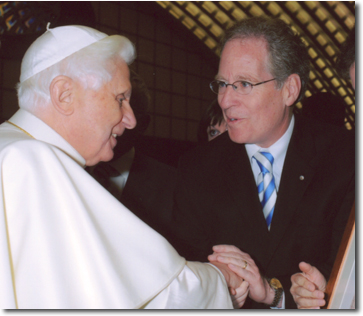 “I would like to express my deep satisfaction for the possibility to continue to profit from your competent and esteemed collaboration in the activities of this [Council],” the Cardinal stated in his letter.

“It has been a great honor to work with the Pontifical Council for the Family,” O’Donnell said. “I am deeply grateful to Pope Benedict XVI for renewing this honor, and I look forward to working closely with Cardinal Antonelli in defense of the beauty and sanctity of Christian marriage and family life, in service to Our Lord and His Church.”

Dr. O’Donnell was first appointed to the Council in 2002 by Pope John Paul II. O’Donnell has attended several Council gatherings and contributed to the documents published by the Council.

He hopes to meet with Cardinal Antonelli this fall, when he travels to Rome to meet with other members of the Curia, as well as the students currently attending Christendom’s Junior Semester in Rome Program.

“It is fascinating to be part of a Council that draws upon the vast experiences of people from across the world,” O’Donnell said. “Whether they be priest, laity, or bishops from Europe, Asia, South America, or Africa, they all share a common concern for the future of the family. They seek to communicate the full Catholic understanding of the family in the most effective way possible amidst these challenging times.”

The Pontifical Council for the Family was instituted by John Paul II with the Motu Proprio Familia a Deo Instituta in 1981. It is responsible for the promotion of the pastoral ministry and apostolate to the family, through the application of the teachings and guidelines of the ecclesiastical Magisterium, to help Christian families fulfill their educational and apostolic mission.

More information about the Council can be found at www.vatican.va.