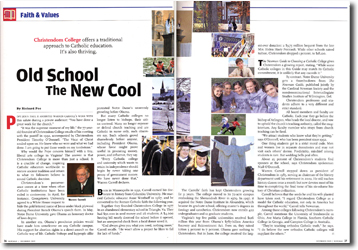 Christendom College is featured in this month’s issue of Newsmax Magazine. Political columnist, author, and speaker Richard Poe penned the article that praises Christendom as the “new cool.”

“Pope John Paul II anointed Warren Carroll’s work with this salute during a private audience: ‘You have done a great work for the church,'” Poe writes. “Why would the Pope concern himself with a tiny, liberal arts college in Virginia,” he continues. “The answer is that Christendom College is more than just a school. It is a crucible of change, inspiring Catholic educators worldwide to restore ancient tradition and return to what its followers believe is sound Catholic doctrine.”

The article’s timing in Newsmax could not be better. On November 18, Conservative opinion leader Sarah Palin told Sean Hannity on Fox News that Newsmax is one of her main news sources.

“I read Newsmax and the Frontiersman and Wall Street Journal and everything online,” Palin said. “I absorb the news via many, many sources.”

Newsmax reaches about 6 million Americans each month. Its popular web site, Newsmax.com, reaches an average of 4 million unique visitors monthly, which would rank it among the top 10 newspaper web sites in the United States.

In the article, Poe also highlights Christendom’s refusal to accept federal funds. “Virginia’s top five public universities received $126 million this year from Obama’s $787-billion America Recovery and Reinvestment Act. Even so, they raised tuition 5 percent to 7 percent,” Poe writes. “Obama gave nothing to Christendom. But in June, the college received the largest-ever donation: a $3.75 million bequest from the late Mrs. Helen Hasty Perreault. While other schools raised tuition, Christendom dropped 1 percent, to $18,120.”

Also, this month’s Homiletic & Pastoral Review featured an article by Classics Professor Dr. Mark Clark entitled “Bringing Back Latin.” Clark examines the threat posed to the great intellectual traditions and scholarly work if a knowledge of living Latin is lost.

“For if living Latin dies,” Clark writes, “the consequences for the Church are grave. What is significant about the fact that the Fathers of the Council spoke readily in Latin is that they thought in Latin, which gave them easy access to the length and breadth of the Catholic tradition.”

“We have two great examples this month showing Christendom’s presence in the secular and Catholic world,” Director of Admissions Tom McFadden says. “Our unbeatable liberal arts education, fidelity to the Catholic Faith, and distinguished faculty continue to impress all who encounter them.”