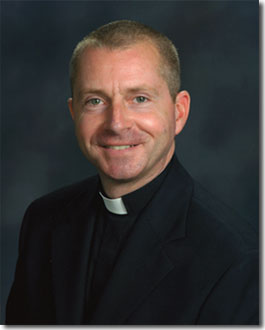 Fr. Planty was born in 1966 in Albuquerque, New Mexico, to parents originally from New York, where his grandmothers still live, one in Upstate New York and the other in New York City. His parents, two brothers, sister-in-law and two nephews currently reside in Loudoun County, Virginia. Since his father was in the U.S. Foreign Service, Fr. Planty grew up living in Panama, Chile, Mexico, Italy, and Spain, attending American overseas schools – and living in “home base” Northern Virginia, where he attended public schools. He graduated from the College of William and Mary in Williamsburg, Virginia, in 1988 with a B.A. in Government and French.

Fr. Planty attended St. Charles Borromeo Seminary in Philadelphia, Pennsylvania, receiving an M.Div. in 1992, the year he was ordained a deacon, and an M.A. in Theology in 1993. He was ordained a priest for the Diocese of Arlington, Virginia, in 1993, and subsequently served as Parochial Vicar at St. Charles Borromeo Parish in Arlington, Virginia, from 1993-1995, and as Parochial Vicar and Director of Religious Education at the Cathedral of St. Thomas More in Arlington, Virginia, from 1995-1996. From 1996-2000 Fr. Planty studied at the Pontifical Ecclesiastical Academy in Rome, Italy, to prepare for the diplomatic service of the Holy See; at the same time, he studied for and received a J.C.D. (Doctor of Canon Law) degree from the Pontifical Gregorian University in Rome, writing his dissertation on The Law of the Church and the Building of Churches: Canon 1216 and Sacred Architecture.

He worked as the Secretary (Deputy Head of Mission) of the Apostolic Nunciature in Addis Ababa, Ethiopia, from 2000-2002, a post, which also covered Eritrea, Djibouti, and the African Union. In 2002 Fr. Planty left the diplomatic service of the Holy See to return to pastoral work in his diocese, and was assigned as Parochial Vicar and Director of Religious Education at Holy Family Parish in Dale City, Virginia, from 2003-2005, where he later became Adminstrator, then Pastor, from 2005-2010.

Fr. Planty is fluent in Spanish, French, and Italian and will join Christendom’s theology faculty in teaching courses in Catholic doctrine to freshmen.

Former Chaplain Fr. Daniel Gee has been assigned as Pastor of the Church of Saint Rita in Alexandria.