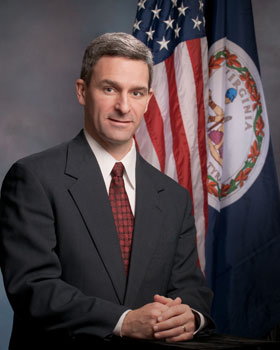 Virginia’s Attorney General, Ken Cuccinelli, will deliver a talk entitled, Living Your Catholic Faith in Politics and Government, to the students and faculty at Christendom College on April 2, 2012, at 6:00 p.m. as part of the college’s Major Speakers Program.

Cuccinelli was elected Attorney General of Virginia and sworn into office on January 16, 2010.  As attorney general, he has risen to national fame through his fight against the unconstitutionality of the Healthcare Reform’s individual mandate, and has been called “ObamaCare’s most formidable foe.”

Prior to serving as attorney general, he served in the Senate of Virginia from August 2002 to January 2010.  As a state senator and private attorney, he worked to improve the Commonwealth’s mental health system.  In private practice, he served as a court-appointed attorney for individuals in Virginia’s involuntary civil commitment process.  After joining the Senate in 2002, he passed legislation that provided for more humane treatment of the mentally ill.

He has also been a champion for Virginian’s property rights, sponsoring a law (and now backing a constitutional amendment) to dramatically curb the state’s eminent domain power, so private land can no longer be taken by government from one private owner and given to another, merely to increase tax revenues, economic development, or private gain.

For more information about Cuccinelli and his work, visit the Attorney General’s website.

The talk will be held in the St. Lawrence Commons and will be followed by a reception.