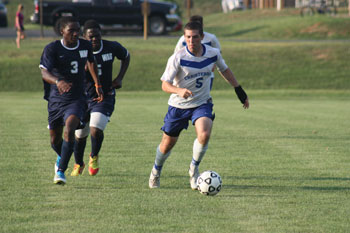 Ten Christendom College student-athletes are nominated to the 2012 USCAA National All-Academic Team. To receive the nomination each student-athlete achieved at least a 3.5 GPA in addition to their contributions to their teams.

“One of the benefits of being part of a National Conference is that our student-athletes who work so hard to excel in all they do are able to be recognized by the conference for their achievements” says Chris Vander Woude, Athletic Director at the College.

These student-athletes participated in one of three fall sports that Christendom offers: women’s volleyball and soccer, as well as men’s soccer. Christendom boasts seven varsity intercollegiate sports, which sets itself apart from other colleges who are similar in size and enrollment.

“We believe that Christendom offers a uniquely balanced opportunity for student-athletes, like these ten, to be able to compete at the college level, while at the same time being formed academically and spiritually through a Catholic liberal arts education,” Vander Woude says. “These recipients demonstrate what is possible here at Christendom—to strive for excellence in all they do.”

All ten students played important roles in their teams’ successes this past season. Seven of them were starters on their respective teams, including Tim Beer who will graduate having started each soccer game for the Crusaders during his four years at Christendom. These student-athletes are also involved in many other facets of campus life and serve as Residence Assistants, Student Activities Council members, Student Ambassadors, sacristans, and altar servers. In addition many are dual sport student-athletes, who also play basketball or baseball.

The USCAA is a national organization that exists to provide quality athletic competition on a regional and national level. The USCAA focuses specifically on smaller institutions of higher learning and their student-athletes. The association believes that all athletes and programs deserve the same national opportunities as larger institutions and works to provide those opportunities. Find out more at theuscaa.com.