Christendom College alumna Sr. Mary Jordan (Ida Friemoth, ’05) made her Solemn Profession of vows as a Dominican nun in August of last year at the Monastery of St. Jude in Marbury, AL. Upon this joyous occasion, she took the time to reflect on her time at Christendom College, and how it affected her discernment to the religious life: 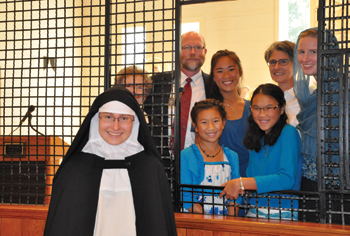 Sister Mary Jordan with her family.

My time at Christendom was very influential in forming me intellectually, spiritually, and culturally, and preparing me to discover God’s Will for my life here as a cloistered Dominican nun. I chose to attend Christendom because I desired to learn Truth, especially the truths of Thomistic philosophy and theology, and knew that at Christendom I could count on being taught according to the mind of the Church. During the course of my studies, I realized ever more fully that not only philosophy and theology, but all the classes fit together in presenting a coherent and lived Catholic worldview.

This education is of great value to me here in the monastery in two ways. First, the solid foundation in the thought of our Dominican Doctor, St. Thomas Aquinas, is an incomparable preparation for our doctrinal study as Dominican nuns, and even more so for understanding and living the virtuous life. Second, the broader foundation that a truly Catholic liberal arts education provides is an invaluable asset to the community as a whole. To know and to be able to enunciate the doctrine of the faith and its basic philosophical underpinnings is very rare in the world today, and is of great help in grasping, maintaining, and defending the essentials of the cloistered contemplative vocation.

Another area in which my experience at Christendom directly led into my vocation is that of the liturgy. Never before had I experienced the Holy Sacrifice of the Mass offered in Latin, or been exposed on a consistent basis to the beautiful and formative riches of the classical polyphony and Gregorian chant regularly sung by Christendom’s Schola, Choir, and entire community. The reverence and sense of the sacred of the College chaplains also made a deep impression on me. When I first visited this monastery, I walked down the hall to the chapel for Vespers, completely unaware that the nuns sang the major hours of the Divine Office in Latin using their traditional Dominican chant. When I heard the nuns singing in Latin my heart soared; God was using the liturgical formation I received at Christendom to point out to me where He wished me to be His.

The cultural and social life of the College also played a role in preparing me to embrace this vocation. Through the example and support of friends, l joined the Legion of Mary, made St. Louis Marie de Montfort’s Total Consecration to Jesus through Mary, and began praying the Divine Office, all of which helped prepare me for my vocation as a Dominican nun. This is not to mention the good times of companionship and fun we shared in the context of the College community with its mix of faith, academics, and campus events. I remember one of my first days as a freshman, taking a walk with two new friends out to “Kelly’s field.” As we stood amid the tall grass, the Angelus rang from the College chapel. One of us led the prayers, and we genuflected there in the grass at the verse, “The Word was made flesh.” This is such a simple thing, but indicative of the culture which so many Christendom students strive successfully to create. Living this culture amid virtuous friendships helped me grow as a person and prepared me to embrace this solidarity on a spiritual level in the religious life, where we come together in the monastery to live as “one mind and heart in the Lord,” as our Rule of St. Augustine states.

Finally, although I studied at Christendom hoping to learn “what went wrong” with the culture in order to be able to “go out and fix it,” so that culture might again dispose men to holiness, I have discovered in the monastery the truth of what Peter Kreeft once said: that perhaps the most powerful warriors in the fight between the Culture of Life and the Culture of Death are the contemplatives spending hours a day in prayer before the Blessed Sacrament. Those who are called to live in the world, working to restore all things in Christ in the family, workplace, or apostolate, are doing important and crucial work for the kingdom of God. Yet it is the life of prayer and sacrifice that is at the heart of every active work. Both are needed.

Every day the nuns here take turns keeping an Hour of Guard, praying the Rosary before Our Lord in the Blessed Sacrament as Our Lady’s Guard of Honor. Someone is always there, in the chapel; interceding for the world. I learned at Christendom that the highest use of anything is to dedicate it to God. This is the reason for my vocation—to belong solely to God, on behalf of those with a mission like Christendom, and on behalf of the whole world.