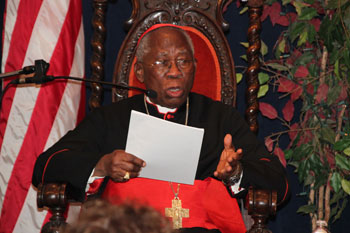 Francis Cardinal Arinze, Prefect Emeritus of the Congregation for Divine Worship and the Discipline of the Sacraments, spoke on “The Year of Faith and the Apostolate of the Laity” at Christendom College on February 4.  Speaking as part of the college’s Major Speakers Program, His Eminence’s talk was based upon his forthcoming book that examines the role of the laity in transforming the culture.

Cardinal Arinze, who is celebrating his 55th anniversary of ordination this year, explained that the Holy Father, in establishing the Year of Faith this past October 11 on the 50th anniversary of the opening of the Second Vatican Council, wants the faithful to pay more attention to the Council and what it taught.

During the Year of Faith, Catholics are encouraged to intensify their reflection on the faith, be more vigorous in their adherence to the Gospel and profession of faith, celebrate the sacred liturgy, especially the Holy Eucharist, with more diligence, read the Catechism of the Catholic Church more frequently, and establish more credible ways of witnessing to Christ.

His Eminence then focused on one way of witnessing to Christ – through the apostolate of the lay faithful.

“The Church has always understood the call to follow Christ by faith and Baptism as a call to the apostolate,” began Cardinal Arinze.  “By apostolate, we mean the mission of the Church, the motive of Christ in founding His Church. It is to spread the Good News of salvation in Jesus Christ, so that all men and women may know the One, True God and Jesus Christ Whom He has sent, and knowing Him, that they believe in Him, live the new life He has won for all humanity and find eternal salvation in His name.”

Cardinal Arinze explained that there are no spectators in the Church, and that everyone has a role to play. The apostolate expected of a person in the Church depends on and follows on what that person is called to be in the Church. The laity, who comprise 99.9% of the Catholic population, are to carry out their part in the mission of the whole Church by engaging in temporal affairs and ordering them according to the plan of God.

In Gaudiem et Spes, the Council Fathers wrote, “Let the lay person take on his or her own distinctive role,” which Cardinal Arinze explained as meaning that lay people should strive to discharge their earthly duties conscientiously and in response to the Gospel spirit.

“Secular duties and activities belong properly, though not exhaustively, to lay people,” he said.  “As citizens of the world, they are to observe the laws proper to each discipline and labor to equip themselves with competence, each person in his or her profession…The Christianization of the temporal order, or the bringing of the spirit of the Gospel into secular affairs, is the apostolate specific to the laity.”

According to the Dogmatic Constitution, Lumen Gentium, the lay apostolate is a participation in the saving mission of the Church herself, and the laity are called to make the Church present and operative in those places and circumstances where only through them can she become the salt of the earth.

“The laity are to persevere in promoting cultural values, in harmonizing faith and civic duties, and in guaranteeing religious freedom for citizens,” Cardinal Arinze said.

Many Christendom students were able to greet and chat with the Cardinal following his talk.

Finally, in Apostolicam Actuositatem, the Council reminds the faithful that Christ’s redemptive work, while of itself directed toward the salvation of people, involves also the renewal of the whole temporal order.

“God’s plan for the world is that people should work together to restore the temporal sphere of things and to develop it unceasingly. By temporal sphere is meant family, culture, economic affairs, the arts and professions, political institutions and international relations, as well as their development and progress,” he said.

His Eminence concluded his lecture by enumerating some reasons for the urgent need of the lay apostolate today and some reasons for hesitation on lay engagement. He said that many countries and cultures have turned away from God and leave God out of life in society, and this needs to change. Marriage and the family are under attack in one country after another and the witness of lay people in the mass media, in parliaments, in governments, and in academic institutions is absolutely necessary in order to overcome these threats to the Gospel.

“Politics and government have to be evangelized,” he said. “These are specific fields where the lay faithful are called to bring the spirit of Christ into the various areas of secular life. If the laity do not do this, who will do it? The presentation of the Christian stand on social questions, when made by lay people who are well prepared, has special power to convince the general public more than the witness by clerics and religious. Very symbolic and convincing is the example of that king [Baudouin of Belgium] who resigned his kingship rather than sign a law in favor of abortion. Such action is worth more than a thousand words.”

There are some, though, that believe that it is very difficult for the laity to get involved in transforming the culture, due to the fact that there is a sort of power struggle going on between the clergy and the laity. Cardinal Arinze recommends that each person does his specific vocation and apostolic work, which for the laity is the Christianization of the temporal order as insiders. But to do this, they must be educated and adequately prepared for their mission.

“Our prayerful hope is that this Year of Faith may have as one of its fruits that the lay faithful will realize more and more the dignity of their calling in the Church and in the world, and that they may more vigorously take on their own distinctive role and launch out into the deep,” concluded His Eminence.

Christendom College’s Major Speakers Program is an important aspect of the academic life at the College, offering the students and community an opportunity for cultural, intellectual, and spiritual enrichment beyond the classroom. The program offers students the opportunity to gain greater insights and depth of understanding of important issues, and to interact personally with a wide-range of men and women who are shapers and critics of our society.

About Cardinal Arinze
Cardinal Arinze was ordained a priest in 1958 and was consecrated bishop in 1965. In 1979 his brother bishops elected him president of the Catholic Bishops’ Conference of Nigeria, a position he held until 1984, when Pope John Paul II asked him to serve as president for the Secretariat for Non-Christians (now the Pontifical Council for Interreligious Dialogue). One year later, he was appointed Cardinal by Pope John Paul and, in 1999, he received a gold medallion from the International Council of Christians and Jews for his “outstanding achievements in inter-faith relations”. From 2002-2008, he served as Prefect of the Congregation for Divine Worship and the Discipline of the Sacraments. Cardinal Arinze remains active as a highly sought speaker and catechizer, being featured in programs and events that cover Pope John Paul II’s encyclicals and apostolic letters, Vatican II, and many other topics. He is also the author of several books and has been frequent guest on Christendom’s campus.