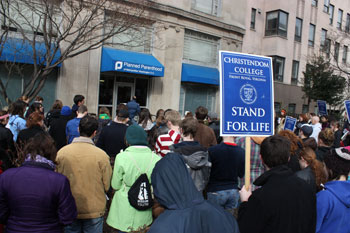 Christendom College’s pro-life student group, Shield of Roses, held its largest spring semester pro-life prayer protest at the Planned Parenthood clinic located on 16th Street in Washington, D.C., this past Saturday, March 18. Approximately 140 students, faculty, staff, visitors, and friends prayed four rosaries and sang a number of Marian and religious hymns in front of the abortion clinic, while the “pro-choice” escorts looked on.

“Shield is something that is really important for us students. If we’re not leading the pro-life crusade, who will?” said Sara Federico, a senior and a leader in Shield. “When we have these large turnouts with students praying, it brings so much hope and peace to the sidewalk counselors. There were so many people who passed by that were angry and bitter, which is really sad, but you see that our powerful witness is making a difference. We’re touching all these people’s lives in a small way–we are young people dedicated to the pro-life cause.”

The Shield of Roses group is Christendom’s oldest student-run group, founded the first year of the College’s existence in 1977. This year’s group leaders – seniors Chris Roberts, Sara Federico, and John McFadden – were all awarded “Volunteer of the Year” awards by the Diocese of Arlington at the end of last year for their tireless efforts on behalf of the unborn.

The group protests at this same clinic each Saturday morning during the academic year, but normally only around 20 students make the trek into D.C. on a weekly basis. Once a semester, however, the group’s leadership organizes what it calls a “Mega Shield” event and encourages as many of the members of the College community as possible to participate. Last semester, Mega Shield drew as many as 240 students.