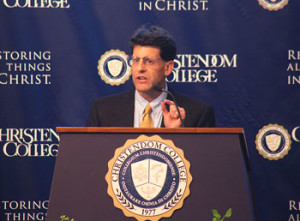 Dr. Adam Schwartz, professor of history at Christendom College, appears in the most recent volume of Seven: An Anglo-American Literary Review, an annual journal that provides an interdisciplinary forum for discussion of the lives and works of seven specific authors, including J. R.R. Tolkien, G. K. Chesterton, and C. S. Lewis.

In an article entitled “The Hopeless Hope of G. K. Chesterton,” Schwartz commends fellow Chesterton scholar Ralph Wood’s book, Chesterton: The Nightmare Goodness of God, for dispelling a common misunderstanding of Chesterton’s thought.  Rather than being a naïve optimist, Schwartz argues, Chesterton believed in the goodness of being not because he was ignorant of human malevolence, but despite an acute awareness of evil, and in some respects due to that apprehension of iniquity.

While a student at the Slade School of Art in the early 1890s, Chesterton was nearly driven mad by confronting an idealistic form of solipsism and a pessimistic aesthetic decadence that shattered his boyhood liberal Christianity.  In recovering from this personal nightmare, Chesterton found a lasting source of sanity in what became his bedrock conviction: gratitude for external reality, simply because of its gratuitous existence, reveals a radical joy at the heart of life that is more fundamental than even the worst evils that mar, but cannot unmake, this essential goodness of being qua being.  As he became a more orthodox Christian, Chesterton elaborated this principle into the theological virtue of hope.  Amid the undeniable fact of sin in a fallen world, God’s loving creation and redemption of that world still prevails.  Yet that triumph is the triumph of the Cross.  God conquers evil not by overlooking it but by suffering it and using it as the instrument of salvation in the Passion of Jesus.  The crucified Christ, then, epitomizes the nightmare goodness of God.

For more on this article, see www.wheaton.edu/wadecenter/Journal-VII.  Schwartz is the author of The Third Spring: G. K. Chesterton, Graham Greene, Christopher Dawson, and David Jones (The Catholic University of America Press, 2005).