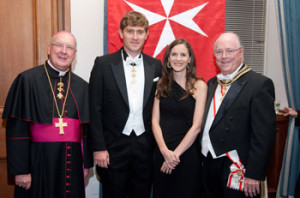 Memphis is not known for being a bastion of Catholicism, with Catholics only making up 6% of the total religious population. Despite this fact, alumni Anna (Wright) and Greg Polley are having an incredible impact in the birthplace of rock and roll, thanks to their “Wojtyla Institute” — a monthly speaker series that is dramatically drawing people closer to the Faith.

After graduating from Christendom, the Polleys felt the need to share the education and culture they cherished at the college with others. In the summer of 2000, Anna participated in a trip to Germany with the International Institute for Culture (IIC), at the recommendation of college president Dr. Timothy O’Donnell. Upon returning to the United States, Anna believed that the format of the IIC would be the perfect means for bringing the education and culture of Christendom to the people of Memphis.

“Something we thought we had to share upon our return to Memphis was the exceptional education we received at Christendom. While Catholics are small in number in Memphis, there is a large Catholic footprint. We started the Institute because we wanted to continue our own formation within a community of Catholics who are seeking something more — exposing folks to the richness of Catholic culture we experienced at Christendom in the process,”said Greg.

In February of 2012, with the backing of the Order of Malta in Memphis, the Polleys founded the Wojtyla Institute, operating it out of their home in the city. Over fifty people come to their home each month for the talks, with speakers coming in from Memphis and beyond, including alumnus Ben Akers, S.T.L,, former Christendom professor, and dean of the Augustine Institute, Dr. Christopher Blum, and current Christendom professor Dr. John Cuddeback. Making connections with these speakers allows the Polleys to recommend them to other groups in the Memphis area as well, including a popular Theology on Tap group for young adults.

Outside of the Wojtyla Institute, the Polleys are making a difference in other ways in Memphis as well. Greg was recently inducted into the Order of Malta, Memphis Region, and works with them to help organize an annual youth retreat in conjunction with the Franciscan Friars of the Renewal and the Sisters for Life, ministering to high schoolers in the Mid-South. Both Greg and Anna are highly active in their parish also, with Greg on the board of a classical curriculum urban charter school and Anna active in the parish choir.

These alumni, and their families, are bringing what they learned at Christendom back into their homes, their offices, and beyond, seeking to make Memphis a better place. Because of them, and the people they have touched through their words and actions, the legacy of Tradition and the Faith will continue to be passed down throughout Memphis and the Bible Belt for generations to come, as they truly “restore all things in Christ.”