The area around the Christendom College’s campus is as rich in history as it is rich in natural beauty. Front Royal is located close to the outlet end of the historic Shenandoah Valley. The Valley was settled well before the War for American Independence. The origin of the town’s unique name is uncertain. One story, probably apocryphal, says that during that war when an officer trying to teach march and drill commands to untrained militia finally gave up the effort when it came to assembling them in the center of town, and simply directed them to “Front the Royal Oak!” More likely is that the name derives from colonial times when the Shenandoah Valley was known as “the Royal Frontier” of the King’s domain, and the French on the eastern side of the Alleghenies referred to the area as “Le Front Royal.” 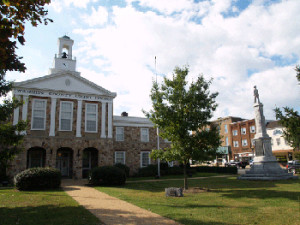 Not far to the north, the little town of Harper’s Ferry where the Shenandoah River joins the Potomac was the scene of one of the most famous episodes in American history, when in 1859 John Brown and his band of revolutionaries were attacked and captured by Robert E. Lee. Despite his bloodthirsty intentions, Brown’s admirers in the North made him into a hero, and men marched to the Civil War singing “John Brown’s body lies a-mould’ring in the grave; but his soul goes marching on!”

During the Civil War, the Shenandoah Valley was the scene of the prodigious marches of “Stonewall” Jackson, whose campaign, which was conducted almost entirely in the Valley, is still studied in military academies all over the world. The Shenandoah Valley was a route for surprise Confederate efforts to invade the North, outflanking the Union Army of the Potomac that fought in northern Virginia. One of the most dramatic Civil War battles was the Battle of Cedar Creek, near Front Royal, in 1864. Confederate General Robert E. Lee had sent a substantial part of his Army of Northern Virginia secretly to the Valley to catch by surprise the Union army then sweeping down the Valley from the north under the command of General Phil Sheridan. The Confederates attacked at dawn and drove the Union army back in near-rout. But General Sheridan had been on a journey in the rear; riding south that morning, he saw the fleeing Union troops coming toward him, apparently decisively defeated. He called on them to turn around and counterattack. Among the knots and groups of retreating men the word flashed: “Phil Sheridan’s here, boys! We’re going back!” They did turn back, attacked the Confederates, and won the battle. 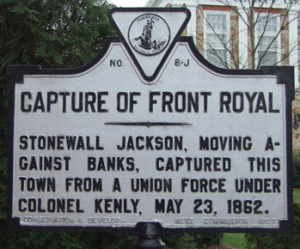 Driving to Front Royal from Washington, D.C., via Interstate 66, one passes through Thoroughfare Gap where, in happier times for the Confederates, Robert E. Lee outmarched the Union army under General John Pope and joined “Stonewall” Jackson at Manassas to win the Second Battle of Manassas (or Bull Run) in 1862, now memorialized in Manassas National Battlefield Park.

*N.B. This is not an official program of Christendom College.