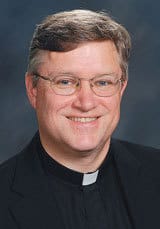 Fr. Pollard was born in Frankfurt, West Germany, on Dec. 22, 1962, to David and Ilse Pollard. He has three brothers, including Fr. Christopher Pollard, who currently serves as pastor of St. John the Beloved Church in McLean, Virginia. Fr. Pollard received a bachelor’s degree from St. Charles Borromeo Seminary in Wynnewood, Pennsylvania, then continued his theological studies at Mount St. Mary’s Seminary in Emmitsburg, Maryland. He was ordained by Bishop John R. Keating on May 19, 1990, and was named parochial vicar of Holy Family Church in Dale City. He was named administrator of the newly-formed St. Veronica Church in Chantilly in 1999, and served there as pastor of St. Veronica until 2007. He also served as pastor of St. Anthony of Padua Church in Falls Church before coming to Christendom. Fr. Pollard has been a spiritual director in the Legion of Mary, and also spearheaded evangelization efforts for the diocese as chairman of the Evangelization Committee of the Priests’ Council.