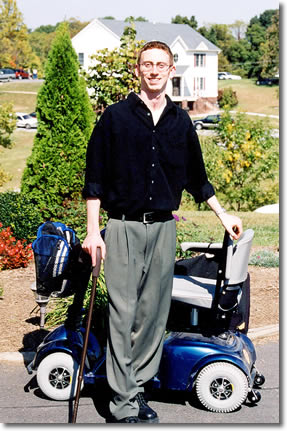 On March 4, 2001, Paul Jalsevac, a Christendom College sophomore, was involved in a serious car accident on his way back to campus. Paul was taken to the local hospital, Warren Memorial Hospital, where it was determined that his liver had been cut in half. In fact, the doctors there said that it was the toughest case they could remember in the hospital’s history. Paul was operated on and then stabilized. Due to the extreme nature of his injuries, he had to be taken to the trauma unit of Inova Fairfax Hospital, over an hour away from Christendom College. On arrival at Fairfax Hospital, it was determined that, besides the external cuts and bruises, and a severed liver, Paul also had a broken pelvis. The outlook for Paul was extremely bleak. In fact, the original prognosis was that he would not survive the first night. His chance of survival was less than five percent.

Over the next couple of days, while Paul underwent three major surgeries (during which his heart stopped once) and the doctors and surgeons were determining their best course of action, students and professors from Christendom stayed at the hospital with Mr. and Mrs. Jalsevac. The students who were not able to go to the hospital to be with Paul went on a fast of bread and water for Paul’s well-being and placed their prayers before the Blessed Sacrament in Christendom’s Chapel. Also during this time, Paul and his family were placed on prayer lists and prayer chains all across the world. Whole convents, a major seminary in Rome, Mother Angelica on EWTN, and even the Holy Father himself were asked to pray for Paul and a miraculous recovery for him.

Throughout the month of March, Paul’s condition changed almost daily. There were times when it seemed as if death was inevitable, other times, life. Due to the serious nature of the injuries, Paul was very prone to high temperatures, fevers, and infections. The whole world was able to keep apprised of Paul’s condition through lifesite.net, an internet site run out of Canada by Paul’s father. Daily reports were posted to the site, along with pictures of Paul in his hospital bed being visited by fellow students, friends, and relatives. On March 22nd, Paul was transferred to a hospital in Canada to be near his family in Toronto.

Near the end of March, Paul seemed to finally regain some consciousness, and began to make movements and gestures at his family. By the beginning of April, Paul was sitting up in a chair, with the assistance of his nurses. He was able to write down his thoughts to communicate with his family. He could read novels and listen to music. On April 10th, after 37 days in critical care in three different hospitals, Paul was moved to a different floor of the hospital.

Paul had to learn how to speak again, due to the fact that he had required a tracheostomy earlier in his treatment. He received Holy Communion for the first time since the accident on April 12th, Holy Thursday. By April 20th he was back to eating normal foods. On May 4th, with the aid of his nurses and crutches, Paul took his first steps in two months. By May 19th, Paul was getting in and out of his own wheelchair and was released from the hospital. At the beginning of June, Paul began going to rehabilitation to work on walking and gaining his weight back. At this time, he weighed in at only 117 lbs, about 40 lbslighter than his normal weight!

And on August 28, 2001, after much struggle, pain, hardship, prayer, and perseverance, Paul Jalsevac returned to Christendom College where he can now be seen zooming around campus in his bright blue electric go-cart.

As a side note to this whole story, there was a young 17 year old patient named Jennifer at Ivona Fairfax Hospital at the same time as Paul who was in an apparent permanent coma. At the request of her mother, Jennifer was baptized bya visiting priest. Her mother sited the reason for her decision to have her daughter baptized was because of the witness of the Christendom College students praying for Paul. Remarkably, Jennifer has since come out of her coma and is back to her normal life. Recently, Jennifer visited Christendom to visit with Paul and his friends.

According to the reports from Paul’s father as related on LifeSite.net, “Her [Jennifer’s] parents were grateful when Christendom College students came in to pray at Jennifer’s bedside. Jennifer’s mother, Joyce, was much more at peace after the baptism and prayer attention given to her daughter. One’s view of life and its frailty and the priorities in daily life tend to considerably change after these experiences. So many of the things that seemed so important are really no longer important. As Jennifer’s father said on the day that Paul was transferred from Fairfax, ‘my whole attitude about life has changed because of this experience.’ Ditto. Being so utterly helpless, many of the families turn to the only thing that they can – prayer. Other families, who cannot pray or who don’t know how to, usually very much appreciate that other people will pray for them or with them. In our case, the prayers of friends and families have been a very great help for Paul and ourselves….Special gratitude is expressed to the students and faculty from Christendom College whose intense and constant prayers and concern were a source of great strength.”