Christendom Comes Alive with the Sound of Music 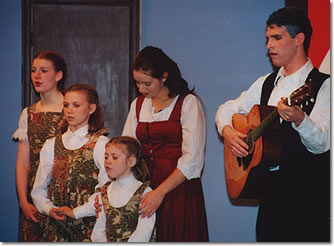 Presenting four performances over the weekend of November 9-11, 2001, The Christendom Players, under the direction of Mike Powell, a Christendom junior, performed an exceptional rendition of Rogers and Hammerstein’s musical, “The Sound of Music,” in Christendom College’s St. Lawrence Commons in Front Royal, Virginia.

According to Dr. Patrick Keats, Producer and Assistant Director of the play, “The Sound of Music” marks The Christendom Players’ third student-directed production. “All of these students have done a wonderful job in acting out this play. They gave 110% to this production and they should all be very proud of their accomplishments. Special recognition should be given to a couple of students: Anne Kopec for her role as Stage Manager, and Pat Scanlon for designing and constructing the set.”