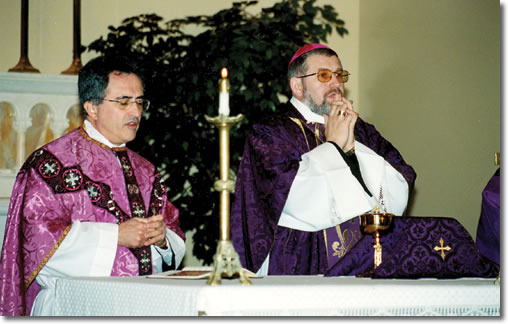 On February 25, 2002, the Most Reverend Jerzy Mazur, Bishop of the Diocese of St. Joseph, located in Irkustk, Siberia, celebrated Mass at Christendom College.

Bishop Mazur has a unique position in the Catholic Church. As of February 11, 2002, he is the new ordinary of the largest diocese in the world. The Polish-born bishop has jurisdiction of a land area that is larger than the United States, with a population of 16 million people, of which 1 million have roots in the Catholic faith, and of which 50,000 are baptized.

Despite objections from the Russian Orthodox Church, Pope John Paul II transformed four Russian Church regions, known as apostolic administrations, into three dioceses and one archdiocese. The main archdiocese is in Moscow, while the remaining three are in Saratov, Novosibirsk, and Irkutsk.

Delivering the homily in Christendom’s Chapel of Christ the King, His Excellency spoke of the Olympics, currently underway in Utah. He made a comparison between Olympic athletes and the Christian faithful.

“The Olympic flame begins on a mountain,” he began, “and then the athletes carry it all over the world until it ends at the Olympic field. For Christians the ‘flame’ starts on Calvary and Christians are called to carry it to the ends of the earth. We must set fire in the hearts of other people. If we can do this, there will be no place for terrorism. We will be able to be merciful and not condemning. Like the Olympians, we must carry the flame to others and strive for the medal.”

Bishop Mazur continued his homily by speaking about the situation of the Catholic Church in Siberia. He explained that the people of his diocese are very poor. Many of them were sent to Siberia “because of their faith in God, or because they were fighting for the truth and were therefore considered enemies of the Russian state.” They built small churches and witnessed to their Catholic faith and heritage. But during a time of persecution, their churches were closed or confiscated and turned into museums of atheism, concert halls, factories, or stores.

“Today, in the territory under my jurisdiction there are 49 priests, 47 sisters, including some lay people from the different countries of missionaries already serving there. In fact, in all of Russia, there are now four dioceses and one seminary,” he said. “In Fatima in 1917, Our Lady prophecized ‘My Immaculate Heart will triumph.’ Today, we are witnessing the conversion of Russia of which Our Lady spoke. Thanks be to God and thanks to our many benefactors, Jan Cardinal Schotte, Secretary General to the World Synod of Bishops, who dedicated your Chapel of Christ the King in 1997, dedicated our Cathedral on September 8, 2000. It was our present to Our Lady on the occasion of her birthday.”

One of the main tasks that the Church in Siberia has before it is the construction of new churches. And in order to build new churches, funds must be raised. “Let us do something together so that all of us will see the triumph of the Immaculate Heart of Mary in this territory of suffering, this territory of martyrs in Siberia, in Russia,” implored Bishop Mazur.

Prior to granting his final blessing, Bishop Mazur exhorted the College community to pray the rosary often. In Siberia, he said, the rosary is referred to as “the catechism of the Gulag” because it was one of the only means of passing on the Faith to those incarcerated in the Soviet forced labor camps. As a token of his appreciation, His Excellency donated to Christendom a beautiful rosary made of stones from Siberia.

The bishop’s visit to Christendom College was arranged through Richard G. Kane, a management consultant from Great Falls, Virginia, with whom the bishop was staying, and long-time friend of the College, Reverend Jerome Fasano, Pastor of St. Andrew the Apostle Church in Clifton, Virginia.