Biochemist Behe Makes a Monkey Out of Darwin at Christendom College 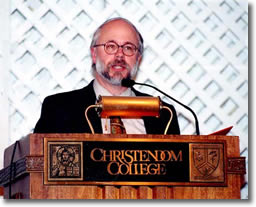 A professor of Biological Sciences at Lehigh University in Bethlehem, PA, Dr. Michael J. Behe is one of a minority of scientist who has taken a second look at Darwinian evolution and has found that some of its conclusions are incompatible with true scientific empirical reality.

Speaking to Christendom College’s entire student body and numerous visitors, Behe presented “Science Stumbles on Design” on January 28, 2002. Author of Darwin’s Black Box: The Biochemical Challenge to Evolution, Dr. Behe is not a strict “creationist,” rather he believes that some manner of evolution did occur, but was guided by the hand of God. He asserts that intelligent design in biology is not invisible, as some would believe, but is, in fact, empirically detectable.

According to Behe, he does not infer design from what we do not know, but rather, from what we do know. “To Darwin, the cell – and every microbiological function – was an unknowable black box, that is, it did neat and interesting functions, but nobody knew how it actually worked. Now that it is possible to look into this box, it is necessary to try and apply Darwin’s theory to it.”

He began his address by quoting Charles Darwin, writing in The Origin of the Species, as saying, “If it can be demonstrated that any complex organ existed which could not possibly have been formed by numerous successive, slight modifications, my theory would absolutely break down. But I can find no such case.” Unfortunately for Darwin, and his devoted followers, Behe seems to have unearthed the missing link to the problem with Darwinism: Irreducible Complexities.

“There are some biochemical systems which require multiple, well-matched parts in order to function, and the removal of any of one of its parts will essentially eliminate the functional ability of the system,” continued Behe. He coined these types of systems, “irreducible complexities,” and argued that these particular molecular systems are stumbling blocks for Darwinian theory because they point more toward intelligent design than slight, successive, random modifications over time. He cited the examples of the human eye, and the blood clotting cascade, and went into great scientific biological detail to show the intricacies and complexity of these molecular structures.

To prove his point in a manner understandable by members of the non-scientific community, Behe used the example of a simple, every day mousetrap. “A mechanical mousetrap,” explained Behe, “is composed of several parts such as the base, hammer, spring, and so on, and the absence of any of the parts destroys the mouse-catching ability of the trap.” He added that Darwin’s vision of natural selection gradually improving function in “numerous, successive, slight modifications” does not seems to apply to these specific systems. “Since intelligent agents are the only entities known to be able to construct irreducibly complex systems, the biochemical systems are better explained as the result of deliberate intelligent design,” added Behe.

Acknowledging that many of his fellow scientists do not agree with his findings, Professor Behe defended his beliefs through a multi-media presentation, showing how his opponents’ disagreements with him do not entirely address the problems with “irreducible complexities” found in humans and nature. “Why is it that, of the thousands of papers published in science journals, none ever discuss detailed models for intermediates in the development of complex biomolecular structures,” asked Behe. This mousetrap example does just that. It makes nonsense out of the theory that these complex structures could have simply “happened” upon their functional arrangement without the intervention of an Intelligent Designer.

According to Behe, one of the biggest arguments against him and his approach to science is that he is a Catholic [with eight homeschooled children] and that his idea of intelligent design is based on religious beliefs rather than on scientific findings. Behe argues that the idea of design is completely empirical, supported by the physical evidence. “The conclusion of intelligent design flows naturally from the data itself – not from sacred books or sectarian beliefs. Inferring that biochemical systems were designed by an intelligent agent is a humdrum process that requires no new principles of logic or science. It comes simply from the hard work that biochemistry has done over the past forty years, combined with consideration of the way in which we reach conclusions of design every day.”

“It is often said that science must avoid any conclusions which smack of the supernatural. But this seems to me to be both bad logic and bad science. Science is not a game in which arbitrary rules are used to decide what explanations are to be permitted. Rather, it is an effort to make true statements about physical reality….Life, at its most fundamental level, is irreducibly complex and such complexity is incompatible with undirected evolution,” concluded Behe.