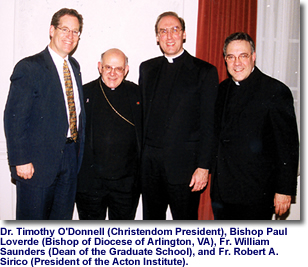 His Excellency Paul S. Loverde, Bishop of Arlington, VA, joined the faculty, staff, and supporters of Christendom College and its Notre Dame Graduate School (NDGS) to celebrate the Patronal Feast of the graduate school on March 24, 2002.

Reverend Robert A. Sirico, President of the Acton Institute for the Study of Religion and Liberty, presented the keynote address at the gala event which was held at the Washington Golf and Country Club in Arlington, VA.

Rev. Sirico received his Master of Divinity degree from the Catholic University of America, following undergraduate study at the University of Southern California and the University of London. As president of the Acton Institute, Fr. Sirico lectures at colleges, universities, and businesses throughout the U.S. and abroad. His writings on religious, political, economic, and social matters have been published in many journals and newspapers, including, the New York Times, the Wall Street Journal, Forbes, the Washington Times, the Detroit News, and National Review.

“When one looks at this diocese, it is great to see the serious way that people take their faith, and the overall vitality of this diocese,” said Sirico. “The affirmation that I received from parishioners after concelebrating Mass today, Palm Sunday, was incredible and was not lost on me. It is nice to be here, in this diocese, and especially here this evening with His Excellency, Bishop Loverde, who by the way, tries to pass himself off as an Italian, but he’s really a Sicilian!”

Sirico’s talk focused on his thirteen year hiatus from the Catholic Faith, and his eventual return to the Sacraments before attending college and the seminary. He attributed his abandoning the Church to a lack of support from the clergy with whom he had contact. He used to ask them questions about the Faith and they would sometimes accuse him of being on the fringe of “religious fanaticism.” Throughout his time away from the Church, Sirico explained that he abandoned prayer, involved himself in a number of leftist movements of the 70s, and lived a “pretty decadent lifestyle.” His acceptance, once again, of the Catholic Faith came gradually but he said that God gave him “a course in apologetics instantly” while he was standing at the tomb of St. Peter in Rome. It was then that he knew that the Roman Catholic Church was the Church established by Christ and then built on the Rock, St. Peter.

The evening concluded with Fr. William Saunders, Dean of the Notre Dame Graduate School, and Dr. Timothy O’Donnell thanking Bishop Loverde for spending the eve of his third anniversary as Bishop of Arlington with the Christendom College community.

The Notre Dame Graduate School (NDGS) is the result of a 1997 merger between the Notre Dame Institute and Christendom College. NDGS offers a Master of Arts degree in Theological Studies with concentrations in Catechetics, Spirituality, Systematic Theology, and Sacred Scripture.