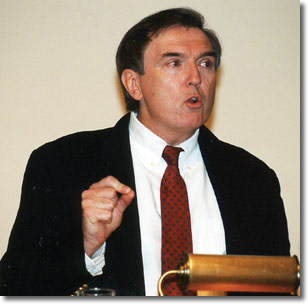 “The world changed on 9/11. Among those changes is a new religious militancy. The tragedy bound us together in grief and mourning. It reminded us, too, of the utter contingency of our being. We naturally expressed ourselves in religious terms. Our politicians led us in prayer. There are many reports of school prayers which, under ordinary conditions, would be called unconstitutional. Unbowed school officials basically said: Go ahead and sue us! They were not sued. I guess the ACLU declared a temporary work stoppage!”

These were the opening remarks of Dr. Gerard V. Bradley, Professor of Law at the University of Notre Dame, who delivered a talk on “The Church and State in America Today” to an attentive audience of 400 at Christendom College on Monday, April 22, 2002.

According to Bradley, September 11 was shocking, but the attack did not seem to confound Americans’ customary thinking about human rights, public authority, and religion. The attacks horribly illustrated the specter, long haunting our politics: religious fanaticism, sectarian violence, zealots with bombs – the perennial villains in our master political narrative.

“The leading effect of that infamous date will, I think, turn out to be confirmation, not refutation, of the standing story about democracy and its cultural preconditions: religion is dangerous and moral truth is incendiary. Secular is safe and so is relativism,” he added.

Due to the actions and rulings of the Supreme Court since the late 1940s, religion and moral truth in the public order are now viewed as purely private matters, reserved to the spheres of family, church, and community. “The policy of the public order is secular, otherwise, the Justices steadily maintain, we would be engulfed in religious intolerance and, often enough, sectarian warfare,” said Bradley.

The history of Catholics in America sheds a certain light upon this topic, for Catholicism has been derided, in season and out, as a peculiarly undemocratic religion, more than faintly un-American. Catholicism is often said to be undemocratic because it compromises the individual’s proper spiritual autonomy. Related to this accusation is the charge that Catholics do not think for themselves when it comes to politics. They are accused of acting undemocratically by trying “to impose their morality” upon others in today’s pluralistic democracy, especially regarding matters of sexual morality. This charge could only have arisen, as it did, after the abandonment by other churches of the common morality, or of a commitment to a decent public morality, or both.

“No wonder politically ambitious Catholics such as William Brennan (in his Senate confirmation hearings) and JFK felt obliged to say that they would separate their religion from their public responsibilities. To my knowledge, members of no other church were similarly expected to privatize their faith,” stated Bradley.

Democracy without foundation in objective morality is a menace to the weak, the poor, the exploitable, the voiceless, and the inconvenient. And in turn, the Pope has taught repeatedly that God is essential to secure an objective morality.

“Whether this is logically required, I doubt. And practically, there are surely some unbelievers who hold to the truth about morals; even the Gentiles have the natural law on their hearts. But the Pope’s teaching about societies, and what it takes for whole populations to stay the course, is right on,” he concluded.