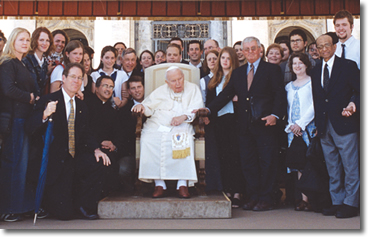 From March 22 to March 30, members of the Christendom College community went on a lenten pilgrimage to Rome. Led by College President Timothy T. O’Donnell, the group stayed on the College’s campus in Rome, the Domus Mariae Hotel, located just minutes from Vatican City.

While there, the group was given the opportunity to meet and have a photograph taken with His Holiness Pope John Paul II.

“He is truly a beautiful man, and holiness just radiates from him,” said Lori Omann, a Christendom College student who will be receiving her Associate of Arts this May. “To be able to see the Vicar of Christ on earth from only a few feet away was such an enormous blessing and honor. Several in our group were able to greet him and kiss his ring. It was very emotional; a feeling that words cannot express.”

Additionally, the group had audiences with J. Francis Cardinal Stafford, President of the Pontifical Council for the Laity; and Jan Cardinal Schotte, Secretary General to the World Synod of Bishops. They also attended a Mass celebrated by Joseph Cardinal Ratzinger, Prefect of the Congregation for the Doctrine of the Faith, at which His Eminence expressed a warm welcome to Christendom College.