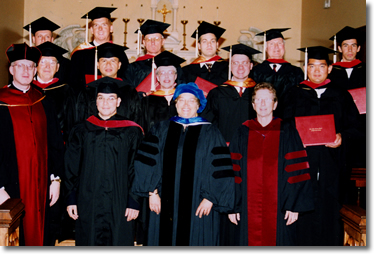 Sixteen students from Christendom’s Graduate School received their Master of Arts in Theological Studies degrees on Saturday, August 2, in a beautiful ceremony in the Chapel of Christ the King on the Front Royal campus. Like the NDGS student body as a whole, this year’s graduates come from all over and represent a variety of careers and backgrounds.

Californian Joseph Arias has worked as a catechist and substitute teacher in the parish school at Queen of Apostles in Alexandria, VA, while studying at NDGS. He hopes to continue studying in theology and philosophy for a doctorate degree in the near future, as preparation for a career as a college professor.

James Atkinson is a Thomas Aquinas College graduate and high school teacher at Tempe Preparatory Academy in Tempe, Arizona. He teaches physics and a special English course that includes philosophy, theology, and Scripture studies. He also has plans for further study in Scripture and hopes for a career as a college professor. James and his wife are expecting their second child in February.

Geovani Flores, a native of El Salvador, is a Network Senior Specialist at US Inspect. He is very active in the Arlington Diocese Spanish Apostolate, where he teaches theology and directs the seven Spanish Leadership Schools in the diocese. He also plans on further philosophy and theology studies, and hopes for a professorial career.

Richard Gill is a retired Chief Warrant Officer of the U.S. Coast Guard. He is married with 5 children and 7 grandchildren, and is a long-time parish catechist in addition to working with and teaching troubled youth at the Prince William County Group Home for Boys and Girls.

Sister Mary Joseph Heisler, originally from Maine, is a Carmelite Sister of the Divine Heart of Jesus in St. Louis, Missouri. For most of the years she was attending the NDGS Summer Program, Sr. Mary Joseph lived in Holland, where she was Novice Mistress and Vocations Director for her order.

John Hill is a government statistician for the U.S. Commerce Department. He has a prior MA in economics, and also hopes to continue his theological studies. He is married with three young children.

Mid-westerner Peter Kennedy has accepted a position teaching theology at Mount Carmel High School in Witchita, Kansas. While studying at NDGS, he taught at Paul VI High School in Fairfax, VA, and helped coach the men’s lacrosse team to the division championship.

Christendom alumnus Eric Kingsepp (’98) is the Director of Course Development at the Catholic Distance University in Hamilton, VA. He plans to complete a doctorate in theology and teach on the college level.

Brian Kranick is a contract specialist for the federal government who has almost finished work on two other graduate degrees (International Affairs and MBA) at The American University in Washington, DC. Brian helps teach in his parish RCIA program, and has established a Catholic Apologetics website.

Margaret Margeton, another graduate with a prior master’s degree (in library science), is a Catalogue Librarian at Marymount University in Arlington, VA. She is a member of the St. Francis de Sales Association, for which she lectures, leads discussion classes, and writes articles on spirituality. She is married with two daughters.

Another federal government employee, Charles Noll, is a graduate of West Point. This is Charles’ fourth master’s degree, and he’s considering another one in philosophy, since his studies at NDGS have whet his appetite for St.Thomas Aquinas.

English-born Gordon Oliver enrolled at NDGS after converting to the Faith. He is Development Director and athletic coach at Flint Hill School in Vienna, VA. He is married with two sons.

Another Christendom grad, Alphonso Lopez Pinto (’00), is off to Rome’s Santa Croce University this fall where he will be studying for a Licentiate and Doctorate in theology. This Philippines-born Canadian citizen plans a career as a theologian and professor.

A native of St. Thomas, Virgin Islands, Amy Sessa-Creque is beginning her fifth year as religion teacher at Paul VI High School in Fairfax, VA. A young convert to the Faith, Amy has a BA from Mt. St. Mary’s University, and also teaches dance.

Charles Shunk, another Christendom alumus (’98), is an applications developer for the Prescience Systems Corporation. He is president of Our Lady of the Valley Curia of the Legion of Mary, and is planning on studying for a doctorate in theology and teaching in college.

William Stoops is a retired computer systems analyst at the Dupont Corporation, who for years attended the Sacred Music Colloquium held during the summer at the Front Royal Campus. He has commuted to his classes at NDGS from Wilmington, Delaware. He is a liturgist and choir director at his parish, and advisor for the Boy Scouts Ad Altare Dei Award.

Each of these graduates received the Master of Arts Degree in Theological Studies. In addition, Peter Kennedy and Richard Gill were awarded the Advanced Apostolic Caechetical Diploma. After the conferral of degrees, Margaret Margeton of Arlington, VA, addressed her classmates, speaking on the Church’s teaching on the universal call to holiness, and what this teaching obliges NDGS’ Class of 2003 to do.

“Vatican Council II, in its document on the Church, Lumen Gentium, taught that ‘all Christians in any state or walk of life are called to the fullness of Christian life and to the perfection of love . . . Each one,’ the Council said, ‘according to his own gifts and duties must steadfastly advance along the way of a living faith, which arouses hope and works through love’,” she began.

“So how do we, as graduates of this school of theology, put all of this into practice? It seems to me that we have made an excellent beginning. Thanks to our dedicated professors, we have been given a solid foundation in knowledge. We have studied the central mysteries of our faith—the Holy Trinity, the Incarnation, the Redemption. We have pored over Sacred Scripture and the Catechism. We have studied creeds and councils, sacraments and morality, philosophy and the virtues.”

“Now we are called to take this knowledge and integrate it into the very fabric of our ordinary lives, using the gifts we have received—our personalities, our talents—to love God with all our hearts, souls, minds, and strength. And, when we have contemplated the face of Christ in prayer, we will, in faith and in the power of the Holy Spirit, be prepared to contemplate Him in the face of our neighbor, as well. What we will be doing, in other words, is striving to put into practice the beautiful truths we have received. In this way, I think, we will be responding to the call to holiness that is addressed to each one of us personally,” she concluded.

Chef Ron and his crew provided a delicious gourmet luncheon to the graduates, their families and guests, and the NDGS faculty.