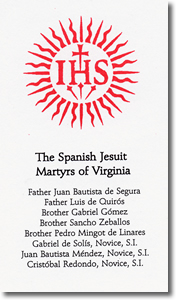 Christendom College President Timothy T. O’Donnell has been appointed an expert in the Cause of Beatification and Canonization of the Servants of God, Father Juan Bautista de Segura and Companions, the Spanish Jesuit Martyrs of Virginia.

At the request of Father Russell E. Smith, Postulator for the Cause, O’Donnell will judge the work of the Historical Commission.

Two of the eight men killed in 1571 by American Indians were Jesuit priests – Fathers Juan Bautista de Segura, Jesuit vice provincial of Havana, Cuba, and Luis de Quiros, former head of the Jesuit college among the Moors in Spain. Three were Jesuit brothers and three were novices in the society.

According to Father Smith, the Jesuits arrived in Virginia in September 1570. The missionaries settled near an Indian village near Yorktown at a time when the mid-Atlantic region was enduring a long period of famine. Therefore, the missionaries had to depend greatly on the Indians for their food and sustenance.

The Jesuits had an Indian guide, Don Luis, who was originally from the Tidewater area but had been taken to Spain by an earlier expedition. A young Spanish boy, Alonso Olmos, also accompanied the priests to act as altar server at Masses. But the Indian guide abandoned the Jesuits after a few days. So, on Feb. 4, 1571, Father Segura sent his fellow priest and two of the novices to plead with the guide to return. But, upon arrival at the Indian camp, the three missionaries were slaughtered. Don Luis arrived at St. Mary’s Mission five days later and killed the remaining Jesuits.

Bishop Sullivan, former Bishop of the Diocese of Richmond, designated St. Elizabeth Ann Seton Parish in New Kent County, the site of the Shrine of the Jesuit Martyrs.

This is the second cause the diocese has opened for canonization in the past two years. The other was announced in February of 2002 for Frank Parater, a Richmond seminarian at the North American College in Rome, who died in 1920 and enjoyed a “reputation for sanctity and heroic virtues.” O’Donnell is also a theological expert for Parater’s cause.