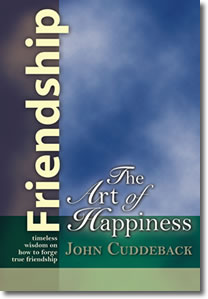 Graduates of Christendom College have many similar characteristics. Strong Catholic Faith, commitment to the Magisterium, pursuit of knowledge and wisdom, and the restoration of all things in Christ are but a few. Due to the rigorous academic liberal arts education they underwent, writing tends to come naturally as well. Recently, three Christendom graduates have authored and published important new books.

John Cuddeback graduated from Christendom in 1989. He received his doctorate in Philosophy from the Catholic University of America and has been an associate professor of Philosophy at Christendom since 1996. This September, Cuddeback announced the publication of his first book Friendship: The Art of Happiness.

Cuddeback had been considering writing a book on friendship when he received a phone call from the Fellowship of Catholic University Students (FOCUS). FOCUS wanted a book on friendship that would be accessible to the undergraduate students involved in its study programs at campuses across the country. Teaching the Introduction to Philosophy course at Christendom had prepared Cuddeback to write just such a book.

According to Peter Kreeft, philosophy professor at Boston College, “Friendship has not ceased being one of life’s greatest goods – but it has ceased being one of modern philosophers favorite topics. John Cuddeback redresses that injustice with a book that impressively combines ancient wisdom (Socrates, Aristotle, Aquinas) with modern experiences, faith with reason, and principles with practicality. It is wonderfully clear and concise, and ranges from topics as traditional as a map of the different kinds of friendships to topics as modern as advice about dating. This book is very wise, very practical, and very much needed.”

And Catholic luminary Alice von Hildebrand highly recommends the book, commenting that “John Cuddeback shows convincingly that in a real friendship, man can have a taste of true happiness. Basing his rich analysis on the works of Aristotle and St. Thomas Aquinas, he demonstrates that true friendship based on virtue benefits the individual, family life, and social life.”

“The teaching of Aristotle and St. Thomas on friendship moved me more than anything else I have ever studied,” says Cuddeback. “It is a great joy for me to be able to share this treasure with a broader audience.” But Cuddeback has no intention of being distracted from the main focus of his intellectual work: teaching in the classroom. In his Acknowledgments he thanks his students in philosophy at Christendom College, “[whose] enthusiasm, insight, and questions are always an inspiration to [him].”

Friendship: The Art of Happiness costs $11.95 and can be obtained by visiting http://www.focusonline.org. 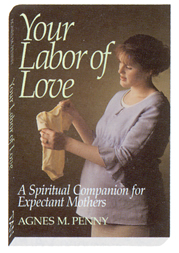 Agnes Curley graduated from Christendom College in 1997. A couple of years later, she married convert to the Faith and Christendom classmate Daniel Penny. They were excited about raising a family and were well-versed in the Church’s teaching on the nature of marriage and the family. When they were expecting their first child, they realized that a Catholic perspective on the various trials and tribulations, joys and sorrows experienced during pregnancy merited treatment in a book. So, Agnes Penny, being the English Literature major that she is, decided to write that book for expectant mothers. She called it, Your Labor of Love: A Spiritual Companion for Expectant Mothers.

“I wanted to sort out for myself the seemingly endless morning sickness and discouragement of the previous nine months,” says Penny, “and the inexpressible joys I was experiencing in caring for a baby all my own at last.”

In her book, Penny shares the very Catholic spiritual solutions she found to the problems and struggles of pregnancy. In 36 short chapters, she covers everything the expectant mother experiences, including, fatigue, mood swings, waiting, post partum, praying for your baby, marital difficulties, in-laws, and much more. The book is written for women who are trying to accept the joys and challenges of motherhood according to God’s Holy Will, rather than the “wisdom of the world” by avoiding children.

This young mother of three (so far!), has given the faithful a work of great insight into this most treasured time of a woman’s life: pregnancy and motherhood. This book is available through Tan Books (http://www.tanbooks.com) for $12.00.

Alumnus John Janaro, Chairman of Christendom’s Theology Department and valedictorian from the Class of 1995, recently published The Created Person and the Mystery of God: The Significance of Religion in Human Life. This is Professor Janaro’s second book; his first was, Fishers of Men: Apostles of the Modern Age.

The book addresses important issues in the philosophy of religion and Catholic apologetics. It presents and analyzes classical and contemporary arguments for the existence of God, the mystery of creation, the necessity of a vital relationship with God for human happiness, and the corresponding violence of secularist culture against the human person. The book also explores the foundations of Catholic apologetics by presenting the glorious, compelling, and inescapable claim of Jesus Christ, God incarnate, the Divine answer to man’s search for meaning and purpose in life. Janaro’s book is available from http://www.1stbooks.com