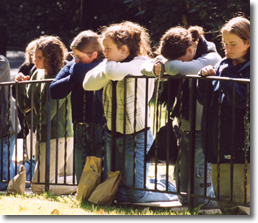 To celebrate the Year of the Rosary, the entire Christendom College community made a pilgrimage to the National Shrine Grotto of Lourdes and the Basilica of the National Shrine of St. Elizabeth Ann Seton, both in Emmitsburg, Maryland, on October 2. The more than 350 pilgrims ventured to Emmitsburg from Front Royal on 5 chartered buses, College vans, and individual vehicles. Because the pilgrimage was focused on the Rosary, the pilgrims prayed all four sets of mysteries of the Rosary.

The National Shrine Grotto of Lourdes is one of the oldest American replicas of the revered French shrine, dating to about two decades after the apparitions at Lourdes (1874), although the site had already been in use for more than seventy years as a place of prayer and devotion.

The Grotto was proclaimed a Public Oratory on December 8, 1965 by His Eminence Lawrence Cardinal Shehan, Archbishop of Baltimore. A place of pastoral beauty and spiritual inspiration, the Grotto draws hundreds of thousands of religious pilgrims and tourists annually.

Following a visit to the grotto and the recitation of the Luminous mysteries, the pilgrims traveled to the Seton Shrine, but a few miles away. Built in 1965 in anticipation of the canonization of Elizabeth Ann Seton, the Shrine is a beautiful tribute to St. Elizabeth Ann Seton. The splendid chapel was built in 1965 in anticipation of her canonization..

On August 28, 1976 the chapel was solemnly dedicated as the Saint Elizabeth Ann Seton Chapel by the Most Reverend William D. Borders, Archbishop of Baltimore. In 1991, Pope John Paul II designated the Shrine Chapel a Minor Basilica. On August 4, 1991, the formal ceremony was carried out by Archbishop Agostino Cacciavilan, Apostolic Pro-Nuncio to the United States.

The group participated in an afternoon Mass in the Shrine Chapel, even providing the sacred music for the celebration. Following the Mass, the Sorrowful mysteries were prayed in community.

Christendom’s last college-wide pilgrimage was held in the fall of 2000, in celebration of the Jubilee Year.