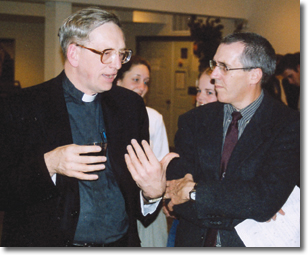 On October 6, Fr. Joseph Koterski, S.J. delivered the first of Christendom College’s 2003-04 Major Speakers Program lectures. The title of his lecture was “Learning from Aquinas: Dante on Free Choice of the Will.”

Reverend Joseph W. Koterski, S.J., is Chair of the Philosophy Department at Fordham University, where he has taught since shortly after his priestly ordination in 1992. He also serves as the Editor-in-Chief of International Philosophical Quarterly and as Chaplain and Tutor in Queen’s Court Residential College for Freshmen on Fordham’s Rose Hill campus.

Among his recent publications are The Two Wings of Catholic Thoughts: Essays on Fides et Ratio (Catholic University of America Press, 2003) and Karl Jaspers on Philosophy of History and History of Philosophy (Humanity Press, 2003).

In his lecture, Fr. Koterski explained that Dante’s Divine Comedy is extremely alert to philosophical and theological insights from St. Thomas Aquinas, whose works Dante studied with the Dominicans of Santa Maria Novella in Florence.

Fr. Koterski focused on Cantos 16-19 of the Purgatorio, where, according to Koterski, “the character Dante learns first from Marco Lombardo and then from Vergil about the proper philosophical understanding of free choice of the will.” The explanation related by Dante is thoroughly Thomistic and extremely sensitive to various crucial distinctions that are emphasized by Aquinas in the Summa Theologiae.

In the Purgatorio, Dante, through the use of poetry, examined the idea of determinism and whether the stars or any outsides sources had any effect on humans’ free will choices, Fr. Koterski explained. Dante recognized that various forces influence the will in its choices, but that those same influences do not deny human freedom.

“Despite the fact that we are necessarily attracted to what we perceive as good, we are also free by virtue of the superior power of the will to the attraction of any good we could meet in this life,” concluded Fr. Koterski.