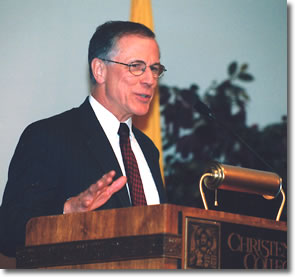 “Medical science now treats man as veterinary medicine had dealt with lower animals. Contraceptive and reproductive techniques, some of which have been around for centuries, were never applied to human beings until our own day. Cats would be spayed, dogs neutered. Now we do it to human beings. Artificial insemination has long been standard in the breeding of cattle. We now do it to women. Human life in its coming into being is no longer considered human life and is subjected to experimentation and the ignominy of cryopreservation. We no longer treat human beings with the awe and reverence due to those endowed with the Divine image. What does this mean for man as the biotech century dawns? Myriad new ways have been developed for engendering human life, and many of them result in man paying the price in damage and injury, even as he tries to draw the maximum profit.”

Thus began Dr. John M. Haas, President of The National Catholic Bioethics Center in Boston, Massachusetts, in his talk entitled “Catholic Morality in a Brave New World: Biotech Threats to the Human Person” to the Christendom College community on November 10.

Speaking as the second of Christendom’s 2003-04 Major Speakers, Haas explained that the Catholic Church actually condemned cloning in 1987 (Donum Vitae), ten years before the first cloning of a mammal, the sheep Dolly. At the same time, the Church condemned the engendering of human life through parthenogenesis, a technique that has been developed, albeit not yet successfully, in only the last few years.

“How was the Church able to anticipate and morally assess a means of engendering life before it had even been tried? How is it equipped to reflect morally on human developments even before they occur,” asked Haas. “Because the Church is ‘the expert in humanity,’ as Pope Paul VI put it. The Church knows the purposes for which man was created and so can unerringly judge whether certain actions will thwart those purposes.”

He continued by explaining the impossibility of addressing the ethical issues of reproductive technologies or cloning or stem-cell research without understanding that the debates surrounding them take place in a cultural context, a context that fundamentally shapes the debate itself and gives meaning to the words being used, and that there are certain fundamental cultural presuppositions.

“The presuppositions most prominent in our society go by the names of moral relativism, utilitarianism, and human autonomy,” said Haas. “And the one word that has come to embody them all in popular culture is choice. I will choose whether I live or die – if you are sufficiently weak and vulnerable and dependent, I will choose whether you live or die.”

He explained how he understood that individuals try to accomplish good through use of many of the new procedures in the so-called reproductive technologies. Still, he said, the use of the term reproductive instead of procreative and the application of the notion of technologies to the engendering of new human life “vividly illustrate the dehumanization of the human person” that has occurred in our secularized, godless culture.

“Great human good can come from contemporary advances in microbiology and biochemistry, but these advances will turn to bitter ash if they are achieved at the expense of the human person,” he cautioned. “This human embryo lying in a petri dish was created a little lower than the angels and is destined to be crowned in glory and honor. To destroy it, to experiment upon it, to use it for the benefit of others is to violate its dignity and the dignity of those who would so use it.”

The Catholic Church teaches in Donum Vitae that the fruit of human generation, from the first moment of its existence, that is to say, from the moment the zygote has formed, demands the unconditional respect that is morally due to the human being in his bodily and spiritual totality, said Haas. The human being is to be respected and treated as a person from the moment of conception; and therefore from that same moment his rights as a person must be recognized, among which in the first place is the inviolable right of every innocent human being to life.

“This new century may be one of new human hope only if we enthusiastically undertake the re-evangelization of culture under the teaching and governing authority of the Church, because the transcendent vision of the human person must be restored if man is to be safe even in his natural condition,” concluded Haas.