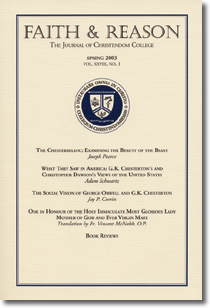 Under the editorial competency of Christendom professor William Fahey, Faith & Reason – The Journal of Christendom College is currently enjoying new life and promise and it does so with the help of minor and major substantial changes to both its outward and inward appearance.

A redesigned cover now bears the College’s seal. To a large degee, this cover marks a return to the journal’s original simplicity. Slight changes in fonts and layout accompany the new approach to design. It is hoped that these visual changes will bring further grace and beatuy to the journal.

And inside the journal, the content has developed as well. It will now be a regular feature of Faith & Reason to offer new or rarely seen translations of various works from Catholic culture. The essay section remains largely the same, but the review section is undergoing augmentation.

It is hoped that these changes will further the journal’s commitment to articulating the relationship between faith, reason, and culture. Faith & Reason is published quarterly by Christendom College and is available by calling 1-800-698-6649 or going to www.christendompress.com. An individual subscription costs $25.