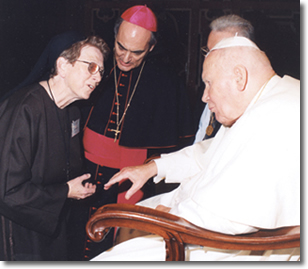 Sister M. Timothy Prokes, FSE, Professor of Theology at Christendom’s Notre Dame Graduate School, was invited to be an observer at the 400th Anniversary Meeting of the Pontifical Academy of Sciences, held November 7-11 at the newly restored Casina Pius IV, in the Vatican Gardens. Members of the Pontifical Academy are appointed by the Pope, and represent a variety of nations, disciplines, and beliefs. (Click HERE for full text of Pope John Paul II’s address)

Among the current 80 members, 30 have been awarded the Nobel Prize. Galileo was among the first members of the Academy. The presentations from two working groups at this year’s meeting focused on “Mind, Brain, and Education,” and “Stem Cell Technology,” of particular interest to the Sisters in regard to scientific research and Theology of the Body.

Pope John Paul II received in Audience the Academy members, guest Presidents of Academies of Science from around the world, and observers. There was an
opportunity for each in attendance to greet the Holy Father. The conference members had their daily noon meal at Domus Sanctae Marthae, the small “hotel” which Pope John Paul II had built within Vatican City mainly as a residence for the Cardinals meeting in conclave.