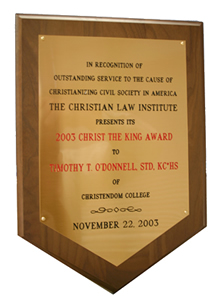 The Christian Law Institute bestowed its Christ the King Award on Dr. Timothy T. O’Donnell, President of Christendom College in Front Royal, Virginia. He received this prestigious award following his keynote address at the Institute’s 28th Annual Christ the King Dinner held in the Cornhusker Hotel on November 22.

The award was given to O’Donnell in recognition of his outstanding contributions to the cause of Christianization of civil society in America; his distinguished leadership of many years in Catholic higher education; his promotion in his books, articles, and lectures of Catholic apologetics, history and spirituality; his devotion to and work for the Catholic family; and his own family of nine children, all the while remaining faithful to Jesus Christ, His Church, and His Revelation.

The focus and mission of the Christian Law Institute is to instruct Christian people in the social teachings of the Catholic Church, to alert them to possible lines of Christian social and political action, and to familiarize them with the glories of Christian history, culture, and civilization. Further, the Institute pays public honor to Jesus Christ the King and to His Incarnation all while pursuing a policy that is constructive, non-violent, lawful, and in accord with Catholic morality.

In his keynote address, O’Donnell focused on the history of the teachings on the kingship of Christ, beginning with Pope Leo XIII’s Annum Sacrum and Pope Pius XI’s encyclical Quas Primas which instituted the Feast of Christ the King. He demonstrated the continuity of this papal teaching with the teaching example of Pope John Paul II. O’Donnell reminded the participants that “our King is a crucified King,” and that we must be prepared “to fight at His side to advance His Kingdom by serving and defending the truth through the holiness of our lives.”

Upon O’Donnell’s return to Christendom College, he led the entire College community in an act of consecration to the Sacred Heart of Jesus, which is recited annually on the College’s patronal feast of Christ the King.

The Act of Consecration and dedication to the Sacred Heart was written and promulgated by Pope Leo XIII on May 25, 1899, in the encyclical Annum Sacrum (Holy Year). In fact, according to Pope Leo, the encyclical and the consecration constituted “the greatest act of [his] pontificate.”