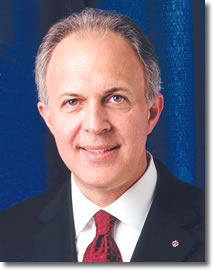 Carl Anderson, Supreme Knight of the Knights of Columbus, will deliver the keynote address.

Carl A. Anderson is the chief executive officer and chairman of the board of the world’s largest Catholic family fraternal service organization (KofC), which has 1.6 million members.

From 1983 to 1987, Anderson served in various positions in the Executive Office of the President of the United States, including Special Assistant to the President and acting Director of the White House Office of Public Liaison.

Anderson is also vice president of the Pontifical John Paul II Institute for Studies on Marriage and Family at The Catholic University of America in Washington, D.C.

In 1995, he was installed as a Knight of the Equestrian Order of the Holy Sepulchre of Jerusalem and in 1999 as Knight Commander. In 2000, Pope John Paul II named him a Knight in the Order of St. Gregory the Great. In 2002, Anderson was appointed consultant to the Pro-Life Committee of the United States Conference of Catholic Bishops.

He currently serves on the Board of Directors of the Pope John Paul II Cultural Center and the Board of Trustees of the Basilica of the National Shrine of the Immaculate Conception, both in Washington, DC.

Anderson holds degrees in philosophy from Seattle University and in law from the University of Denver. He and his wife reside in Connecticut.

Invitational information can be obtained by contacting Tom McFadden at 800-877-5456 ext. 239 or tmcfadden@christendom.edu.

The Notre Dame Graduate School (NDGS) is the result of a 1997 merger between the Notre Dame Institute and Christendom College. NDGS offers a Master of Arts degree in Theological Studies with concentrations in Catechetics, Systematic Theology, and Moral Theology.