Author H.W. Crocker III delivered a lecture entitled “The Catholic Church: Defender of Freedom?” to an attentive audience at Christendom College on February 9. 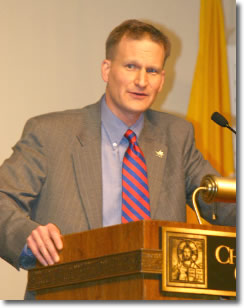 “Wherever one looks in the modern world, one finds massive confusion about the nature of freedom. For example, Catholics say you can smoke cigarettes, if you want to, that’s your choice,” began Crocker. “Secular liberals say, no, smoking is bad. On the other hand, secular liberals say, you can kill a baby if you want to, that’s your choice, because that baby is dependent upon you; you have power over it so use it and kill that baby if it’s inconvenient.”

Among his many books, Crocker is the author of Triumph: The Power and the Glory of the Catholic Church, A 2,000-Year History about which Christendom College founder, historian, and author Dr. Warren H. Carroll said is “the best one-volume history of the Church that [he] ever read.”

“Catholics say that freedom begins with the right to life, and that freedom cannot be defined as the right to kill those who are dependent on us; freedom cannot be defined as the abolition of responsibility,” he said. “Let’s step back for a moment and distinguish two realms of freedom, because the Catholic Church is attacked on both – the personal and the political.”

According to Crocker, who, when not writing, works as a book editor at Regnery Publishing in Washington, DC, the Catholic Church is generally seen by outsiders as “a repressive institution that wrongly inhibits harmless and natural desires, inculcates unnecessary guilt, and is hypocritical in any event, full of sodomite priests, doddering bishops, and brutal nuns who attempt to force their minions to march in lockstep rote recitation of a rather gruesome and intolerant fairy tale.”

Crocker explained that the Church affirms man’s freedom through the doctrine of free will – a doctrine that puts the Church at odds with the world. It is generally the world that talks of the fate of nations and individuals as being determined by race, economics, history, psychology, genetics, fate, astrology, the will of Allah, or even, predestination. The Catholic Church stands alone in radical defense of man’s free will and his God-given right to that freedom, he said.
“Catholics have never tried to ban human nature,” continued Crocker. “Instead, if we understand authentic freedom as freedom in the truth we understand that creation is good, the natural law is written on men’s hearts, and happy are those who march beneath the sign of the Cross – but there is a Cross, and our lives are a drama, a lifelong journey of sin and redemption.”

Crocker then talked of the fact that it is an often said, although incorrectly, that the Western world didn’t taste of freedom until the Protestant revolt of Luther. In fact, said Crocker, the Reformation Protestant critique of Catholicism was that it was too free. Catholics were seen as “drunks, layabouts, and party animals,” insistent on celebrating every possible saints day with booze and brawls. The Church was full of art and luxury and pagan-book-loving sensualists who forgave all rather than condemned all, Crocker said.

“On which side is freedom: celebrating life, the joys of creation, the nativity, or banning everything to abolish sin and improve economic productivity?” questioned Crocker.

“And who today, stands for the freedom of every unborn child to the right to life?” he asked. “Who stands today for the absolute integrity of every individual life against genetic or other engineering of the human person? What institution in the United States is the greatest non-government provider – that is, non-coercive provider – of education, medical care, and aid to the poor? And even here, the freedom for which the Church stands is under threat by interest groups and bureaucrats who would compel the Church to turn its hospitals into abortuaries, to force its insurance providers to cover the costs of artificial contraception that the Church considers sinful, and even potentially to dictate what is taught in Church schools.”

But Crocker warned that there are more insidious ways to penetrate and secularize the Church from within. An institution like the Church, he said, is always an attractive target for certain revolutionary types who leave everything standing but cunningly empty it of significance.

“Today, one is less likely to find a French Revolutionary shooting priests, abolishing the Church of Christ and replacing it with the Church of Reason, throwing out the Gregorian calendar and starting again with the Year Zero. Yet just as dangerous, if not more so, you will more likely find men and women in Catholic institutions and in priestly and religious vocations who are at one with the secular world and who are content to leave everything standing but to cunningly empty it of significance,” he cautioned.

He continued to explain to his captivated audience that we can all find and defend freedom if we pursue the truth. “When modern men adopt the cynicism of jesting Pilate, saying ‘What is truth?’ we can tell them. We have not washed our hands of the responsibility of searching for it.” Through reason, Revelation, and in our free will acceptance of truth through the gift of the Holy Spirit we are able to find freedom, he said.

“The spirit of Catholic freedom will always be vibrant, because it is a key to the faith. The true Catholic is someone who believes in loyalty to persons and institutions, fidelity to the faith, and otherwise letting the good times roll. I have confidence that this is also the spirit of Christendom College. You have a great slogan that I’ve seen: ‘To change the culture, it helps to have one.’ You can be sure you have the right one,” he concluded.