One Woman Drama on Life of St. Faustina Comes to Christendom 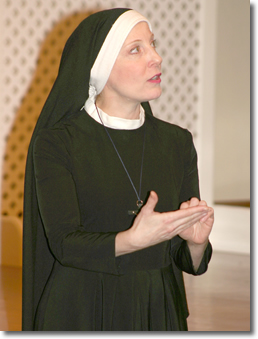 Saint Faustina Kowalska died in 1938 at the age of 33, and was canonized by Pope John Paul II in April 2000. Although she lived much of her life in obscurity, she obeyed directives of her superiors and recorded a diary of both the extraordinary graces she received, as well as her daily life in the convent. Her diary Divine Mercy in My Soul has been published and translated from the original Polish into several languages.

Scimone’s program, titled Saint Faustina — Messenger of Mercy, was presented in a series of seven scenes reflecting significant facets of the Saint’s life, including trust in God’s mercy, love for Mary, love for Jesus in the Blessed Sacrament, dealing with emotional and physical trials, and the need for quiet prayer to hear God’s voice in our lives. After each dramatic segment, Scimone sang a song relating to the scene, with music drawn from both traditional and original sacred music. Fully costumed, Scimone presented her drama without scenery or props, with the intent that the simplicity of presentation maintains the focus on the spoken delivery of the script. Scimone has performed Saint Faustina — Messenger of Mercy for churches, schools and conferences in both the United States and Canada, as well as at the John Paul II Cultural Center in Washington, DC, and the Shrine of The Divine Mercy in Stockbridge, Massachusetts. Her recordings of Catholic music are heard on radio. As a classically trained singer, she has performed as a soloist at the Kennedy Center in Washington DC, on the steps of the U.S. Capitol, and in concert in New York City.