Regis Martin Reminisces on the Catholic Literary Days of Old

On March 15, Dr. Regis Martin delivered the last of Christendom College’s 2003-04 Major Speakers Program lectures. The title of his lecture was “Remembering Our Past: The Catholic Literary Revival.” 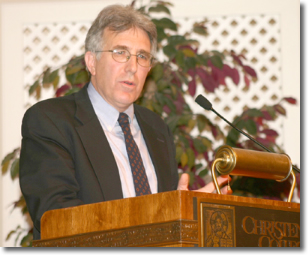 “There once existed in this country the most extraordinary revival of interest among Catholics in the arts, literature, philosophy, history; a great flourishing of liturgical and spiritual life; forms of public worship, private devotion, including Corpus Christi and Marian Processions, Forty Hours, and movements of the lay apostolate,” began Martin. “It was really the most splendid flowering of Catholic life and thought, arts and letters. In short, a whole Renaissance of the Catholic Thing.”

Martin is a Professor at Franciscan University in Steubenville, OH. He teaches courses on the Trinity, The Church, The Sacraments, Grace, Eschatology, and the world of the Catholic Literary Revival. He has written several books, including The Suffering of Love, The Last Things, Garlands of Grace, and Confessions of a Cradle Catholic.

“And what has become of this great mushrooming of Catholic life and culture?” he asked. “Almost overnight, it seems, it all came to grief. How did it happen? What forces led to so dismal and complete a rout?”

Martin, the father of ten children, explained that the decline in the Catholic culture can only be blamed on Catholics themselves, and not “some vast leftwing conspiracy or members of the Red Brigade bent on a Maoist remaking of history.” He also believes that far too many place blame on the Second Vatican Council.

“On the contrary: the insistent and eloquent plea of the entire conciliar event that we set about the work of reform and renewal ought rather to have awakened an even livelier interest in and awareness of the Catholic past. Certainly not its liquidation,” he added.

He noted that it was in reaction to the fact that the transcendental was disappearing, in attempting to oppose and overcome the enveloping secularization of modern life and culture, that the whole movement of the Catholic Revival arose in the first place.

“It was the deepest possible perception in faith among certain highly articulate Catholics themselves, of the sheer beauty and poetry of that transcendent realm, that moved to energize them on behalf of a movement to revive the Catholic Thing,” he stated. “Once upon a time there were certain numbers of people possessed of a sensibility so resonant with a feeling for God, for the sacred, the mysterious, the sacramental, that in concerting their energies to give form to all that they felt and knew, a kind of culture arose which, mediated through the sacramental life of the Church, provided a distinctive shape and direction to much of the literature and art experienced among Catholics as recently as forty or fifty years ago.”

So much of the literature of that time and place seems to have been blazed with a special intensity, giving off unmistakable glints of glory, he continued.

“God and the soul were taken with utmost seriousness. The world itself was charged with the most awe-ful grandeur of God. And because God had invested so much of Himself already in the enterprise – of nature, of grace – everything touching man was equally emblematic of adventure and drama not finally of this world. Man was everywhere free to choose, to decide for or against God. But clearly, the highest possible choice, the one for which every human being was created, was holiness. Personal sanctity, the restoration of self and the world to Christ, was at the heart of what the movement was about.

“To build a world whose dimensions remain flat as a map – where neither heaven nor hell exist, but only a dull two dimensional world mired in this space and that time, a flat opaque surface covering only the emptiness of sheer unending abyss – is not a prospect I or any sentient being would care to welcome. Such a setting in which the choice of good and evil is reduced to ultimately triviality, is a world fir neither for human habitation nor divine penetration. And it does seem to me that thanks in no small part to the exertions of the writers and artists who found a way to harness their talents for God, and thus formed the movement we call the Catholic Revival, the scale and ferocity of so bleak a prospect we have managed somewhat to keep at bay,” Martin concluded.