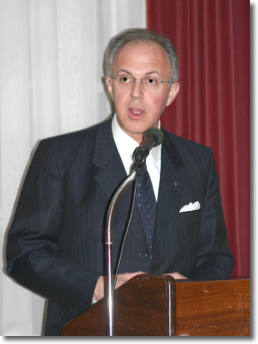 Additionally, Anderson has served in various positions in the Executive Office of the President of the United States, including Special Assistant to the President and acting Director of the White House Office of Public Liaison. He is vice president of the Pontifical John Paul II Institute for Studies on Marriage and Family at The Catholic University of America in Washington, DC, and he serves on the Board of Directors of the Pope John Paul II Cultural Center and the Board of Trustees of the Basilica of the National Shrine of the Immaculate Conception, both in Washington, DC.

“Christendom College is an initiative that has grown steadily because so many administrators, faculty, and families were determined to give God permission to let Him work through them,” he began. “Because of that, Christendom College is succeeding and in so doing is changing Catholic education. And I believe it will continue to do so for a long time.”

He continued by explaining that the very name, ‘Christendom,’ has been at times a stumbling block for some, due in large part to a misunderstanding of its meaning. But for Anderson, ‘Christendom’ has always stood for an effort at finding a right order in society, that is, the proper balance between faith and reason, and of attempting to integrate it as fully as possible in the life of the believer and in society, including its politics and culture.

“The question of a right ordering of faith and reason and its integration in human action is precisely the question of our own time – and so, the term, ‘Christendom’ is a good term to focus our attention on where it should be focused,” he stated.

Recent developments in Massachusetts suggest that, as with abortion, the country’s law of marriage is moving in a direction hostile to a Christian understanding of human dignity. But this manner of thinking has been developing through the Supreme Court’s rulings for the past forty years. In case after case the legal structures supporting the institution of marriage have been removed one after the other.

The landmark case heralded as the Supreme Court’s greatest protection of marriage was, to the contrary, the greatest threat to its continued stability. The case of Griswold v. Connecticut, in which the Court sought to protect the ‘sacred precincts of marital bedrooms’ by establishing a constitutional ‘right of privacy’ in relation so the institution of marriage.

“Then why is it that we should believe an amendment to the Constitution or other legislation that provides legal recognition of non-marital relationships can possibly provide a long-term solution?” he asked. “We are in the present situation precisely because lawmakers have ignored the natural purpose of marriage, which is premised on its unique ability to provide for the growth, maturation, and socialization of children. That is the reason society has traditionally protected marriage between a man and a woman as a unique institution. There is simply no evidence that any other arrangement can accomplish these results over the long-term and for large numbers of children as well as does marriage.”
The formation of the next generation with an adequate understanding of natural law and human anthropology is one of the most pressing issues confronting society, he said, as evidenced by the amount of time that Pope John Paul II has devoted to these issues.

“And Christendom College and its graduate school are remarkable by the way in which they have responded to this challenge. We must try not to repeat the mistakes of the past which have produced so many Catholic public officials unable or unwilling to appreciate the implications of natural law on the responsibilities of public office.”

He continued by lamenting the fact that, for more than thirty years, Catholics in public office have been illogically saying that while they are personally opposed to abortion they will not impose their view on others. And now these same politicians and others are beginning to use the same language regarding same-sex “marriage.” They say that they do not oppose the teaching of their Church on the matter of abortion, only that is should not have general application, or at least an application supported by law.

“What is difficult to understand is that while these ‘thoughtful politicians’ have for the most part been outspoken on the need to retain the right to abortion, they have been silent about the basis for their personal opposition to abortion. There may be some who oppose abortion simply because the Pope says it is wrong. But I think that on a matter of this importance a public official would want to test the reasoning, the factual and scientific basis underlying this teaching of the Church. On a matter of this importance a Catholic in public office should want to conclude that Church teaching is right because it corresponds with the reality of the situation. Such a person would conclude that abortion is not a morally justified choice on the merits of reasoned analysis and not only because of Church teaching. Such a person would want to conclude that what the Church teaches is the correct moral position,” he said.

He then expressed his difficulty in understanding why Catholic politicians who refuse to use the force of law to protect the innocent also refuse to use the force of their own moral voice to reduce the need for the use of the law. He wondered why politicians who assert they are ‘personally opposed’ to abortion never find the time or the opportunity to tell us why it is that they consider abortion to be a bad choice. Although regarded as moral leaders, they remain silent as to the morality of abortion.

“Who knows how many abortions could have been avoided and how many lives saved, if politicians who refuse to vote against abortion would simply speak out against it. Could they not even do that? How can they explain this seeming indifference to more than a million abortions each years?” he asked.

He explained that this complicity with abortion is becoming increasingly untenable within the Catholic community as the recent action of the new Archbishop of St. Louis has made evident. It is increasingly untenable, he said, not only because it runs counter to legal tradition and to contemporary science, but also because it is contrary to the renewal of the Church begun by the Second Vatican Council.

“Renewal is about a right ordering between faith and reason that leads to an integrated and exemplary Christian witness,” he said. “Most often renewal occurs where the world does not look – for example, on a train passing through the countryside of India, in a starvation cell at Auschwitz, and in a nun’s simple room in Vilnius – and I would also suggest that it has occurred in the basement of a church in New Haven and in classrooms at Christendom College in Front Royal and Alexandria. That is why the work of Christendom College and its graduate school is so important and why it must continue. We each have the opportunity to write our one page in the glorious history of our Church – a history whose final chapter has already been written and which no power on earth can change. And in that reality is a very great comfort and a very great joy.”