Blessed are the Persecuted

Editor’s Note: This reflection by Christendom student Brittany Smith first appeared in The Rambler, the weekly journal written by and for the students at the College. 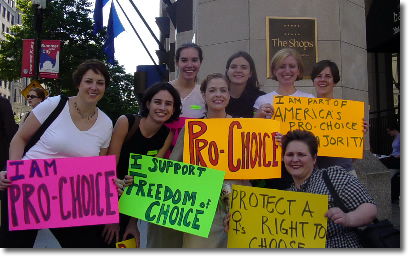 “Blessed are you when men hate you, and when they exclude you and revile you, and cast out your name as evil, on account of the Son of man! Rejoice in that day, and leap for joy, for behold, your reward is great in heaven; for so their fathers did to the prophets” (Mark 6:22-23).

The March for Women’s Lives took place on the day set aside for our Lord, although it seems doubtful that the great multitude of people who descended upon our nation’s capital, chanting their mantra of “Choice,” had Him in mind. Or perhaps they did, as the full panoply of exhibitionists and extremists did in fact include a select few who called themselves Christians. Yes, for a great many, “Pro-Faith” made up 1/3 of their agenda, (accompanied by the additional qualities of “Pro-Family” and “Pro-Choice”). Then there were the Christians for Choice, the Catholics for Choice, and pray, let it have been someone dressed up in a costume, even a Priest proudly walked among them. Please excuse me, for it seems I was mistaken. Not only was Jesus on these people’s minds; for them, Jesus actually served as their inspiration.

But thoughts of Jesus didn’t stop there. No, those choice people make room for everybody. Non Jesus-friendly folks have a welcome place among the choice camp as well. They are just one big happy bundle of contradiction all overflowing with love for one another. It seems the pro-Jesus choicers are more than happy to walk side by side with the less than pro-Jesus choicers. As long as they agree upon the unlimited right to choice, both groups can go hand in hand. Or perhaps it would be more accurate to say that it’s not so much Jesus that the later despise, but the Taliban religious right who are “bringing religion in to their schools”. And apparently, they deeply resent the fact that we have “rosaries all over their ovaries.” Who knew? Perhaps, after all, they love Jesus, and some who were present there even celebrated Him as a radial revolutionary, akin to what they profess themselves to be. They probably entertain thoughts of Jesus walking amongst them. Gosh, our Lord really is for everybody.

When the immense throng of these choice minions first began their parade, thoughts of the endless waves of orcs heading towards Minas Tirath stirred within my memory. But I have no intention of turning this into a LOTR diversion. Rather, almost immediately after this first comparison occurred to me, a much more stirring one followed that, as Catholics, might behoove us to consider. Christ Himself gave us exact instructions for how to be have in such a situation. As it became totally clear that there would be insults and slander directed our way for the duration of the march, it became even more abundantly clear what Christ would have us do: He would have us rejoice! It was no accident that Christ preached one of the beatitudes specifically addressing the very situation we found ourselves in. We were hated, excluded (although many of the choice advocates invited us to join their fun, seemingly on the presumption that we were only on the sidelines because of our “ignorance”), reviled (One of the many slogans they shouted was, “Pro-life is a lie, you don’t care if women die!”), and cast out as evil (once again, referred to as the Taliban and told over and over again that we “hate women”). The deep and abiding founts of hatred within these people did not suffer any obstacle, no; instead they tirelessly hurled words of cruelty at us, accompanied by looks shot through with such intense anger, it almost didn’t seem like any of this could be really happening.

Standing there, I can’t say that I exactly rejoiced. I felt tired, annoyed, saddened, but joyful? By some grace, I believe Mary brought to mind the passage from Mark exhorting the faithful to rejoice, and I can say that I was somewhat comforted by the recollection. Yet, I don’t think that what I experienced was precisely joy, and even the passers by took notice. Shouts of, “You need some sun!” and “Why don’t you smile?” came my way, and I supposed if they had really wanted answers, I would have explained to them that looking out at them from behind the police fences, the thousands of belligerent activists, had made the deeper realization of the completely backwards confusion and stupidity of so many people today, the people marching in Washington representing but a small portion, that also caused a more intense kind of sick feeling.

For three hours they passed. For three hours our thinly distributed of pro-lifers looked out into a swarm of accusing faces. We all quickly learned of our status as women hating, closed0minded, religious bigots from these people, while few among us pro-lifers did so much as utter a word. Many of their signs advocated a sovereign right of privacy over choices, about themselves, especially about their bodies…yes I stand mystified as to how these people were so well-informed about me, when I never divulged any personal information to them. Either they are jumping to conclusions, or they have more than a little disregard to my right to privacy! And it seems even stranger that they themselves spout words about privacy when in fact many of their signs revealed crude and disgusting bits of personal information that would be best remain private, and yes, some of their advocates even walked topless down Pennsylvania Avenue.

There could be no doubt that what we were witnessing was an enormous amount of emotional hullabaloo. The choicers did not even have a distinct purpose that they were marching for; it had something to do with abortion, choice, privacy, Bush, and Iraquis, but somehow all of these issues appeared to be interrelated in their minds, and we on the sidelines happened to be at fault for all of it. I asked Mary’s assistance at one point, that I might stand firm and unafraid, and I quickly realized that the majority of these people can scream and glare, but when they are met by an honest glance, they are left disarmed. And besides, I began to consider the whole thing as the kicking and screaming of the pro-choice people as they make their way out –out of existence, that is, because they are a race destined for extinction as the rapidly self-destruct. Such is the end of their particular brand of choice.

When all is said and done, I hope that the homeless guitar man got some inspiration. He told me he didn’t “do” politics, he just makes music—for everybody. Sadly, he thinks that they “everybody” is too many people, and he told me so. The world is too crowded, that’s the problem. It old him that I thought the problem was not so much too many people, but not enough love. God Himself loved each of us into existence, and in God, thee are no accidents. No mistakes. We are all here for a reason—God’s reason, which is not always clear to us, but is there just the same. Guitar-playing John Smith professed a politically-neutral stance, by which he can accept everyone. Through his music, he can relate to all people. Yet this self-professed politically-exempt fellow nonetheless has been infected with the kind of thinking that would exclude some lives on the basis of global overcrowding. Perhaps, then, we should consider him as a symptom of the greater moral disease that is plaguing our world today. People don’t have much love to give because they have no contact with the Author of love. We as Christians are in contact with this love here and now. Let us rejoice! For all we suffer for Christ’s sake, our reward will be great in Heaven. But while we are here, let us prove to all around us that there is always enough.