Ten Christendom College students recently traveled to the Dominican Republic to serve as missionaries for a six-week period. These students will devote their time helping the peoples of the Arlington Diocese mission territory of Banica. The group, led by Christendom alumnus Fr. Joseph Mary, C.S.J., plans to continue building churches for the outlying villages of Banica; and to bring food, clothes, and toys to the more distant and impoverished villages. 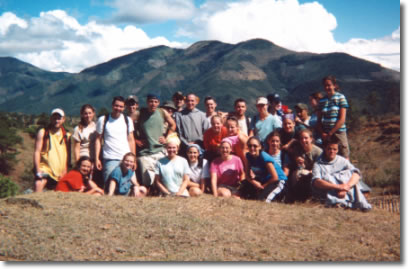 Under the direction of the College’s Dean of Student Life J. Michael Brown, Christendom established its mission program in the summer of 2000. The missionaries first aided then-resident priest Fr. Patrick Posey in the initial development of the mission in Banica. The missionary territory includes the Church of St. Francis in Banica, the Church of St. Joseph in nearby Pedro Santana, and over 72 villages called campos that stretch for miles over the mountains in the center of the island of Hispaniola. From that time on the College has formed a bond with the people of the campos.

Christendom College has now sponsored twelve missionary trips; three this year alone. In fact this past spring, one group of twenty eight (twenty-six students and two religious) went to Banica. A second group of nineteen (eighteen students and one priest) pioneered the College’s first visit to Brazil.

With its success in the Dominican Republic, the College extended its missionary efforts to Goiania, which rests in the heart of Brazil. Christendom alumnus Fr. Basil Nortz, prior of the Canons Regular of the Holy Cross, led the College’s first expedition to Brazil. During their stay, the student missionaries had an opportunity to share their thoughts about the “spirit” of Easter on the mission’s local radio and television show. Through their activities, the students learned the true meaning of performing the “corporal works of mercy.” They brought much needed supplies to alleviate some of the sufferings of the poorest of the poor in the villages surrounding Goiania and they spent time visiting the sick and suffering at the mission’s cancer ward.

“The students have had truly awesome life altering experiences on these trips. Despite the hardships and the loss of a good part of their vacation, they continue to give,” said Mike Brown. “We have a group of eight young men who plan on returning to Banica in the fall to continue their work.”

Brown says Christendom College challenges its students to dedicate their time off to the service of others by acting as ambassadors for Christ. Over the past five years the College has developed the missionary program to assist indigent communities, by bringing necessary help and materials.

In order for the College to sponsor these trips, the faculty and student body regularly hold fund-raising events to help finance the trips. The money not only goes toward transportation and lodging for the missionaries, but also to help provide the villages with seed, and livestock, as well as materials for the chapels. This year the College raised $50,000 for the mission fund over a period of five months.