This past Spring, ten Christendom College students took the National Greek Exam. Nationwide, over 1500 students participated in this academic competition. Eight out of the ten Christendom students received national awards, a proportion far higher than at most other institutions. The National Greek Exam is administered by the American Classical League and for over a century has been a means of assessing and recognizing excellence in Classical languages. 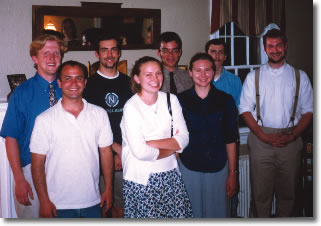 Of special note, Class of 2004 Valedictorian Andrew Hayes won Highest Honors on the Advanced Prose Exam. This award reflects the highest score that a student can attain on the exam, short of a perfect score. This recognition by the American Classical League places Hayes nationally among less than a dozen other students.

Also in Classical Studies news, Sophomore Justin Stover was selected out of an undergraduate competition to become an Intercollegiate Studies Institute Western Civilization fellow. From an applicant pool of about 300 competitors, Stover was chosen to attend Oriel College, Oxford University this Summer to participate in ISI’s interdisciplinary seminar. Additionally, Chairman of the Classical Studies Department Dr. William Fahey will be accompanying Stover to England as he has been selected for a second year to be an ISI Western Civilization faculty member.