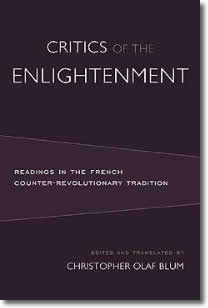 In his book review in the May 3 issue of National Review, deputy managing editor Michael Poterma called Critics “a valuable sourcebook for the thought of an often neglected strand of conservatism…The reader will finish it with a sense of an intellectual tradition in its fullness.”

He has published works on John Henry Newman and the Ultramontanes and Alaisdair MacIntyre and the Catholic Historian. His essays and reviews have appeared in, Downside Review, Faith and Reason, the Journal of Education, Logos, and Sacred Architecture. He has served as a commentator for the panel on the thought of Joseph de Maistre, and has participated in the American Political Science Association’s annual meetings.

While the book’s intended audience is primarily students and teachers of conservative political thought, Blum believes that his subject matter may be appealing to anyone with an interest in European history. In a world that embraces the tenets of change, Critics of the Enlightenment enlightens readers on the true nature of the French Revolution.

The French critics of the Enlightenment, Blum writes in his introduction, “were champions of piety towards family and local customs, fidelity towards kings, solidarity towards fellow men, and loyalty towards the Church.”