Christendom’s “Semester in Rome” program is an experience of a lifetime for College Juniors. Each day brims with wonderful opportunities and experiences. Morning classes include Apologetics, Modern Philosophy, The Culture of Christendom, English Literature, and Italian. The Italian classes are not only educational but amusing, as students make many comic errors along the way to a basic knowledge of this beautiful language.

Three times a week, students are treated to an Art and Architecture tour given by Christendom professor Dr. Douglas Flippen and his wife Maureen. These excellent tours enable students to see many of the significant artistic and architectural treasures of Rome, while whetting their appetite for further discovery on their own.

This past semester, students saw the Appian Way, Vatican City, the Catacombs, the Roman Forum, and everything in between. According to Junior Siobhan O’Connor, “each church, historic site, or work of art reminded us of the glory of our Faith in a concrete, unforgettable way. It was the culmination of the education we had previously received at Christendom.”

In addition to many weekend trips, the students were also granted three long weekends for further travel. Small groups visited Malta, Germany, Austria, Southern France, Switzerland, Paris, Padua, Venice, Sorrento, Capri, Positano, Naples, Sicily, Pompeii, Loretto, Tivoli, and Milan. All the students traveled together to Florence and Assisi at the midpoint of the semester. In Florence, they enjoyed visiting the museums, churches, and markets that have made the city famous. All of the students fell in love with Assisi, the enchanting little town on a hill that has a simple beauty and tangible holiness. Fr. Anthony Mastroeni gave a retreat for students in this most perfect of venues.

One particular noteworthy student trip was that taken by Trish Metzger, Christy Coy, and Mara Mirus to Magenta in Northern Italy. They went to visit the daughter of Saint Gianna Molla: Gianna Emanuela Molla. 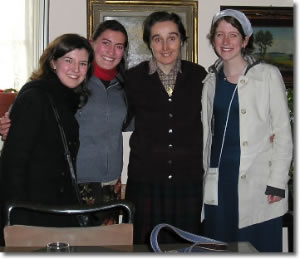 On April 21, 1962, after a difficult pregnancy which she knew would endanger her life, Gianna Beretta Molla gave birth to a little girl. This birth would demand the greatest sacrifice from Gianna for, eight days later, she died from complications. Although she was leaving four children behind, she maintained a heroic faith in God’s Will with the words, “If you have to decide between me and the child, do not hesitate, I demand it, the child. Save it.”

On Sunday, May 16, with Gianna’s husband Pietro and their three surviving children present, Pope John Paul II proclaimed her a saint.

The Christendom trio had hoped to catch a glimpse of the surviving members of the Molla family. They went first to the Molla’s church, where they were welcomed by the parish priest, Don Giuseppe. He took them to the cemetery where Gianna is buried. His sister and housekeeper, Rosanna, cooked them an Italian meal and then walked them to the Molla home. To their great surprise and delight, they were received by Gianna Emanuela Molla, the very daughter whom St. Gianna died to save. Gianna Emanuela now devotes herself to caring for her father, Pietro.

“When the time came for us to catch our train back to Rome, we bade her farewell. Although she acted as if it were an honor for her to receive us, we knew that God had given us the far greater blessing of meeting such a holy and living image of love,” said Metzger.

Special occasions like this were certainly a most memorable part of the Rome semester. Another great blessing for the students was an audience with Cardinal Jan Schotte, President of the Labor Office of the Holy See, Secretary General Emeritus of the Synod of Bishops and an enthusiastic supporter of Christendom College. He provided them with a fascinating and thorough explanation of the purpose and activity of the Synod of Bishops and gave great evidence of his sense of humor and warm hospitality. The students were also granted a personal Mass at the tomb of Saint Peter, a tour of the Vatican Mosaic Gallery and Workshop, and a visit to the Vatican Gardens. Of course, the highlight of any trip to Rome is seeing the Holy Father. The Christendom group attended a public audience with the Pope during Dr. O’Donnell’s visit to Rome in late March. The students also attended all of the Easter Triduum ceremonies at Saint Peter’s, which were all celebrated by or presided over by His Holiness.

Without a doubt Saint Peter’s was the students’ favorite church in Rome. After taking both historical and artistic tours of this incredible basilica and attending daily and Sunday Masses there, the students came to love Saint Peter’s above all of the beautiful churches they had visited. There is a feeling of welcome and joy that any Catholic experiences as he steps into Saint Peter’s Piazza and Basilica and surveys the full splendor of this Catholic treasure. As Dr. O’Donnell said during his tour, Saint Peter’s is the “center of the material universe,” that opens her arms to receive native and pilgrim Catholics alike. The Christendom students would certainly attest to this fact. Perhaps this is why they spent their final day there, savoring their last moments in the Piazza and reminiscing about their unforgettable semester in the heart of Christendom. Their hearts were full of gratitude to Our Lord and Our Lady, first and foremost, but also to all those who made this extraordinary experience possible.