Fourteen students from Christendom College’s Notre Dame Graduate School received their Master of Arts in Theological Studies degrees on Saturday, July 31, in a beautiful ceremony in the Chapel of Christ the King on Christendom’s Front Royal campus. 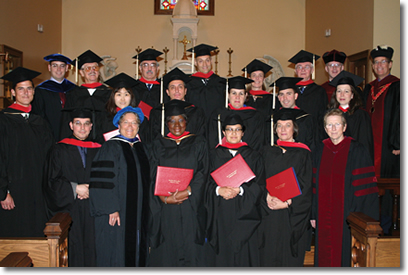 After the conferral of degrees by College President Timothy O’Donnell, Randal Bedard of Alexandria, Va., addressed his classmates, speaking on the Church’s teaching on the universal call to holiness and how the success of the New Evangelization is dependent on the sanctity of Christ’s faithful.

“While all Christians were originally called to holiness in the Beatitudes,” he began, “somehow many came to see it as strictly for priests and religious. The laity came to understand their role on terms of ‘pray, pay, and obey.’ However, a fundamental theme of the Second Vatican Council is that everyone has a vocation to sanctity.”

He then outlined the two main ways through which holiness can be attained, namely, through faith and morals, and liturgy and prayer.

Bedard said that answering the call to holiness in a hostile world necessitates both a steadfast faith and the courage to adhere to Christ’s moral teachings.

“A steadfast faith must be characterized by integrity. When disputes arise, we must speak the saving truth in love, and as Vatican II reminds us, preserve unity in essentials, freedom in doubtful matters, and in all things charity,” he admonished his fellow graduates. “And the courage to adhere to Christ’s moral teachings is also required. Living the Beatitudes may not be most people’s idea of “la vita Dolce,’ but Christ promised a peace and happiness this world cannot give. Thanks be to God that every crucifix reminds us that with every cross comes Jesus.”

He continued by explaining that in our quest for holiness we must approach Christ through the liturgy and the sacraments with profound amazement and gratitude, and with the proper dispositions, that is, with full, conscious, and active participation.

“Incorrectly understood, such ‘active participation’ has lead to liturgical abuses at odds with our vocation to sanctity. The Holy Father has warned against clericalizing the laity and laicising the priesthood. The liturgy, like the Church, is meant to be both hierarchical and polyphonic,” he added.

Prayer is absolutely necessary for sanctity, said Bedard, and spending time with Jesus in the Blessed Sacrament both at Mass and during Eucharistic adoration is imperative for our continued holiness.

“Christ crucified on Calvary is the same Christ present in all the tabernacles of the world. So, there at the ‘foot of the Cross’ of our tabernacles is the Blessed Mother – and there is no better prayer partner than Mary,” he concluded.

The Notre Dame Graduate School (NDGS) is the result of a 1997 merger between the Notre Dame Institute and Christendom College. NDGS offers a Master of Arts degree in Theological Studies with concentrations in Catechetics, Systematic Theology, and Moral Theology.