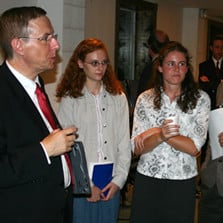 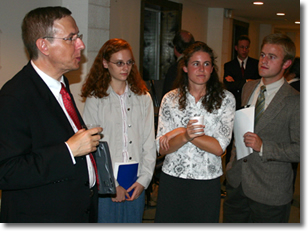 On September 27, Dr. Michael Waldstein delivered a lecture entitled “John Paul II: A Thomist rooted in St. John of the Cross” at Christendom College as part of the College’s Major Speakers Program.

Michael M. Waldstein is the president of the International Theological Institute in Gaming, Austria. He holds a Th.D. in New Testament and Christian Origins from Harvard Divinity School and a Ph.D. in Philosophy from the University of Dallas. He is a member of the Society of Biblical Literature.

In his lecture before the entire student body, he argued two main points, first, that Pope John Paul II’s teaching on marriage is deeply rooted in a teleological conception of nature in agreement with Aristotle’s and St. Thomas’ natural philosophy and, second, that most of what is considered new in the Pope’s personalism is inspired by St. John of the Cross and is in harmony with St. Thomas Aquinas.

To explain his thesis that John Paul II’s teachings on love and marriage are based on the teachings of St. Thomas, Waldstein quoted extensively from the Pope’s book Love and Responsibility, showing how his teaching on personalism is not opposed to the traditional understanding of marriage in terms of its primary natural end, the procreation and education of children.

“In fact” noted Waldstein, “I am not aware of a single philosophical or theological disagreement between John Paul II and St. Thomas, except for the immaculate conception.”

Turning to the second main point of his lecture, Waldstein explained that the personalism of John Paul II is not only not new, but rather, is rooted in St. John of the Cross.

“What is it that personalism means to John Paul II in particular when he uses the term positively?” asked Waldstein. “It means an emphasis on the rationality of human beings, more specifically their rational life as moral agents aware of themselves…Among other things, personalism therefore means, a particular emphasis on lived conscious experience.”

The profound influence of St. John of the Cross on John Paul II is beyond a doubt, says Waldstein, especially if the writings of the two are compared to each other. In particular the close bond between the two writers is the attention they both pay to the lived experience of the person.

“As a student, St. John had a thorough formation in St. Thomas,” Waldstein explained. “Throughout his works he quotes the Angelic Doctor often. Nevertheless, St .John’s language is for the most part not the technical language of St. Thomas. But St. Thomas and St. John deeply agree with each other, despite their differences of language. I think the same can be shown for John Paul II in relation to St. Thomas.”

Waldstein concluded his presentation by asking his audience to take the time to read and understand Pope John Paul II because in his writings and teachings he unfolds and develops many important points that are merely implicit or briefly mentioned in St. Thomas.

“One of the main reasons that faithful Catholics should spend much time on Aristotle and St. Thomas Aquinas is that St. Thomas has been proposed to us by many popes as the common teacher of the Church. If the reason why we accept St. Thomas is the authority of the popes, should we not be interested in the writings of the most recent Pope? Undercutting his relevance as a teacher is to undercut the authority of St. Thomas, which rests on Papal teaching,” he concluded.