Christendom College announces the hiring of Stephen P. Grundman as its Director of Development.

A California native, Grundman graduated from Thomas Aquinas College in California in 1991 with a Bachelor’s degree in liberal arts. He continued his education at The Catholic University of America, earning a Master of Arts degree in philosophy in 1995. 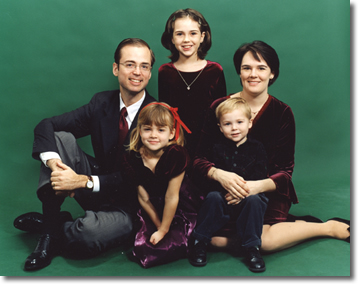 In 1997, after teaching for two years, Grundman entered the world of Catholic non-profits, taking a position with the Legionaries of Christ in Bethesda, Maryland. While there, he gained administrative and development experience working as a catechist trainer and as the manager of a retreat and conference center.

Grundman and his wife, Gwendolyn, homeschool their four children: Therese (10), Mary Beth (7), Marcel (3), and Veronica Rose (8 months). He is also currently completing a PhD in philosophy from Catholic University, with a dissertation on “The Role of Custom in Aquinas’s Philosophy of Law.”

“The newly-created position of Director of Development is absolutely essential to the continued growth of Christendom College,” says John F. Ciskanik, Vice President for Development and Planning. “We have reached a point in our history where we need to better communicate our mission and vision to our donor base and find new members of Christ’s faithful who are interested in supporting our educational apostolate. Working with me and my team, Steve will enable Christendom to move forward with this plan.”

Grundman’s chief duties and responsibilities will be to manage the other members of the development office staff; to organize and direct various fundraising events; to cultivate new donors to the College; and to direct new fundraising initiatives as they are developed.

“As a graduate of Thomas Aquinas College,” says Grundman, “I have a sincere appreciation of Christendom, both as the provider of a curriculum firmly founded in faith and reason, and as a deeply Catholic institution strategically located near the Nation’s Capital and committed to preparing new generations of lay apostles. I’m excited to be a part of the team!”