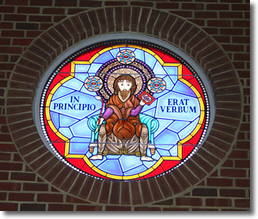 Christendom College began a new era in its twenty-seven year history with the opening of its new 40,000 sq. ft. St. John the Evangelist Library on October 9.

A remarkable piece of classical Virginia architecture designed by O’Brien and Keane LLC to hold 150,000 volumes, the new St. John the Evangelist library will now serve as the academic center of the campus, and the embodiment of the College’s commitment to the vision and nobility of Catholic education.

The lower level of the library has been in use since the beginning of the semester, due to the fact that it houses four new classrooms, but the upper two levels of the library have been closed to the students while the construction team of Petrine Construction put the finishing touches on their monumental work.

“The students of Christendom College deserve this library,” says Director of Admissions Tom McFadden. “Since our founding in 1977, students have been attending Christendom for the unique educational experience that we offer, and not for the buildings. And although that will probably never change, it is nice to be able to offer them this state-of-the-art and aesthetically pleasing library.”

Archbishop Edwin F. O’Brien, Archbishop of the Archdiocese for the Military Services, USA, formally blessed and dedicated the library before a crowd of over 400 friends, alumni, and benefactors. Prior to the blessing, His Excellency was the main celebrant at the Mass of Thanksgiving in the Chapel of Christ the King.

Donna F. Bethell, Christendom’s Chairman of the Board of Directors, officially opened the library when she cut the ribbon in front of the main door. Attendees were then treated to cocktails and hors d’oeuvres while they toured the library and chatted with friends.

The formal program for the evening began with Board Chairman Bethell’s reading of a congratulatory letter from President George W. Bush where he said that the library “reflects [Christendom’s] commitment to higher education and [the Catholic] faith,” and he commended the faculty and administration for helping form the minds of future Americans.

Frank O’Reilly, President of Petrine Construction and an alumnus of the College, made some remarks about the building of the library. The Sean O’Reilly Memorial Library has served Christendom College for the past twenty-six years. It was named after O’Reilly’s father, Dr. Sean O’Reilly, who was a founding board and faculty member of the College and who died in 1982, just five years after founding the College.

Following O’Reilly’s talk, College President Dr. Timothy O’Donnell acknowledged the presence of Mrs. Anne O’Reilly, the widow of the late Sean O’Reilly, and College Founding President Dr. Warren Carroll and his wife Anne. O’Donnell then discussed the historic nature of the library and the dedication and effort it took on the part of so many different people, including the many benefactors of the College.

The evening concluded with the performance of an original orchestra piece, composed and directed by Christendom’s own Dr. Kurt Poterack, and a magnificent fireworks display.