College Celebrates Year of the Eucharist with Procession

On October 1, the Christendom community celebrated the beginning of the Year of the Eucharist with a candlelight Eucharistic procession and benediction. Led by chaplain Fr. O’Kielty, the procession began in the Chapel of Christ the King, stopped at the College’s shrine to Our Lady of Fatima, and ended back in the Chapel. The community prayed an international rosary while processing, reciting the five decades of the sorrowful mysteries in English, French, German, Spanish, and Latin.

At the beginning of this academic year, College President Timothy O’Donnell delivered his welcoming remarks to the student body, emphasizing the importance of the Eucharist and increased devotion to It. Below is his welcoming address. 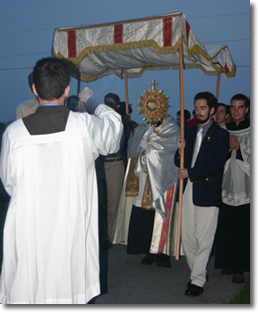 Pope John Paul II has proclaimed October 2004 to October 2005 as the “Year of the Eucharist.” We at Christendom College embrace this year with joy and heartfelt gratitude. As believing, committed Roman Catholics and as a part of our charism, our Christendom community has a special love for the person of the Holy Father.

The pope announced the “Year of the Eucharist” on June 13th, the Solemnity of Corpus Christi. This Pope has renewed the ancient papal practice of having an outdoor procession for Corpus Christi, a practice discontinued after Pius IX lost control of Rome. In June of this year he journeyed in procession from the great Basilica of St. John Lateran to St. Mary Major, the glorious basilica dedicated to the Blessed Virgin who was the first tabernacle of the incarnate Lord. What a great moment it is to see the Vicar of Christ kneel before Christ present in the Eucharist as he leads the plebs Dei, the people of God, down the great Via Merulana for benediction of the Blessed Sacrament. Traffic stops within the city as all pay homage to our Eucharistic King.

One of the most beautiful hidden passages in the Gospel is when Jesus appears to Mary Magdalene early in the morning on that first Dies Domini. When he appears to her, he says, “go tell my disciples that I go before them into Galilee.” What a joyful consolation that must have been to the twelve after the horror and bitterness of the Passion, and their sinful betrayal of the good Lord to hear that He was going before them to the place where He first encountered them, that place where they first fell in love and decided to give their lives to Him and follow Him. Here I emphasize their desire to follow Him, not an idea, not an abstraction, but a person, the God-man. Here, after the sin and betrayal, once again they were invited to “start afresh!”

Our Holy Father continued in his address on the Solemnity of Corpus Christi, “By contemplating with greater perseverance the Face of the Incarnate Word truly present in the Sacrament they will train themselves in the art of prayer and undertake that high standard of Christian living, an indispensable condition for effectively developing the new evangelization.” (Angelus Address for the Feast of Corpus Christi, June 13, 2004).

The Eucharist is the center of the Church’s life and it must be the spiritual center of our Catholic, academic community. We make it central to our lives when we receive Holy Communion, daily whenever possible, but especially on Sunday, the Dies Domini, with our solemn celebration at the 10 am Mass.

We are living in a culture dominated by a practical atheism. It does not so much openly deny God’s existence (for that involves intellectual argument and moves the entire discussion onto “enemy’s” turf as CS Lewis would tell us in the Screwtape Letters), but insists on living as if He did not exist. Despite this cultural miasma in which we all must live, as rational creatures we should acknowledge the Divine Sovereignty. God is a necessary being, independent of all other contingent beings. The essence of being a creature lies in being and acknowledging our dependence upon God. How crucial it is for human beings to be in the truth, to live in the truth of our nature. Man as a creature must confess and acknowledge his dependence on God. This confession, this acknowledgment on the part of man, is adoration.

While you are here you will be studying the highest truths. In this search for wisdom, which is the purpose of liberal education, you will be guided by a brilliant and gifted faculty who will seek to serve as mentors, to guide you in the pursuit of this arduous good. As you begin your course of studies, you can begin to escape from “the matrix,” the many mirages that are set before your eyes by consumerist society, the many seductions that seek to cut you off from true joy. So often our fallen world seeks to envelop you in an effort to fill your life with nothing but transient pleasures, moral indifference, superficialities, and the pursuit of the trivial. The deep desire and need all of us have for a love which is true and pure cannot be found in that world which exalts and flounders in drifting, confused emotions. Strive while you are here to become young men and women of intellect who will be guided by the light of grace and right reason. Strive to become Christian men and women of character.

When you witnessed the faculty take the Oath of Fidelity, you saw in a tangible way that there can be no real conflict between faith and reason for both have a common source in God. There is Someone bigger than the world. As a matter of fact, Someone who has overcome the world, Who is there to help you.

Please remember always that Christianity is a real person, a presence, a face to be known and loved: Jesus Christ who alone gives meaning and fullness to all human life. You will encounter Him in your classes, in your brothers and sisters here on this campus, in the little joys and sufferings which make up daily life, in the great sacrament of reconciliation, and above all else in the Holy Eucharist. I urge you to cultivate the art of listening. If you listen to your conscience, as our Holy Father frequently reminds us, you will see that in the depths of your heart God has placed an ardent longing for truth, happiness, goodness, and beauty. It is by becoming attentive and listening in the quiet sanctuary of your heart that you will come to discover the plan that God has for your life. Your vocation should be understood precisely as that plan which God in His all embracing love has devised for you from all eternity. How truly providential it is that we are all here together!

The Pope in his encyclical on the Eucharist wrote, “it is pleasant to spend time with Him, to lie close to His breast like the beloved disciple and to feel the infinite love present in His heart. If, in our time, Christians must be distinguished above all by the art of prayer, how can we not feel a renewed need to spend time in spiritual converse, in silent adoration, in heartfelt love before Christ present in the most Holy Sacrament. How often dear brothers and sisters have I experienced this and drawn from it strength, consolation, and support.” (Ecclesia de Eucharistia)

Let us all resolve this year to intensify our Eucharistic devotion.

Our Holy Father’s apostolic letter Dies Domini is a crucial document in the battle between the culture of life and the culture of death. In section 46 the Holy Father writes, “since the Eucharist is the very heart of Sunday, it is clear why, from the earliest centuries, the pastors of the Church have not ceased to remind the faithful of the need to take part in the liturgical assembly. ‘Leave everything on the Lord’s Day,’ urges the third century text known as the Didascalia, ‘and run diligently to your assembly, because it is your praise of God. Otherwise, what excuse will they make to God, those who do not come together on the Lord’s day to hear the word of life and feed on the divine nourishment which lasts forever?’ The faithful have generally accepted this call of the pastors with conviction of soul and, although there have been times and situations when this duty has not been perfectly met, one should never forget the genuine heroism of priest and faithful who have fulfilled this obligation even when faced with danger and the denial of religious freedom, as can be documented from the first centuries of Christianity up to our time.”

When I read that passage I could not help but recall one of the highlights of our recent trip to Ireland with a group from Christendom: the celebration of Mass on a Mass rock in a remote glen in Donegal. Two priests evidently had been killed during the years of the penal laws saying Mass at that mountain altar. What made this even more poignant was the dogged determination of one of the priests traveling with us to get to this remote spot to celebrate the Holy Sacrifice. Fr. Denis Donahue is an alumnus of Christendom and priest of the Arlington Diocese. Twenty-seven years ago on August 15 he was delivering papers in his neighborhood when he was shot in the spine by a crazed sniper. It was one of those rounds which scatters upon impact. He fell to the ground and while lying face down, a second shot was fired which hit him yet again. After a number of life-threatening operations in his youth, he is now capable of walking with a leg brace and with arm crutches. We carried Fr. Denis to this Mass rock but he also walked a good part of the way with a determined resolution.

As he celebrated Mass with another priest, it was overwhelming to think of the love the Irish people had for our Lord in the Blessed Sacrament in their fervent desire to attend Mass at a time when to do so was a capital offense. It was overwhelming to recall that time in Ireland when every priest had a price on his head and when Mass was celebrated with sentries posted to warn of oncoming soldiers. Frequently a layman would don the cassock of a priest to serve as a decoy in case they were discovered by soldiers; sometimes they were and the layman was hung. The priest, however, was hurried away to safety for the important thing was that the Mass must go on! Yes, the Holy Sacrifice of the Mass must go on until the end of time.

May we never take this great gift, this priceless treasure, for granted. I urge you, I urge all of us together to intensify our devotion to our Lord in the Holy Eucharist, everyday, if you can, and especially at our solemn 10 am Sunday College Mass. Take to heart the words of our Holy Father, “start afresh from Christ,” for today He says to you once again, “Behold I make all things new!”